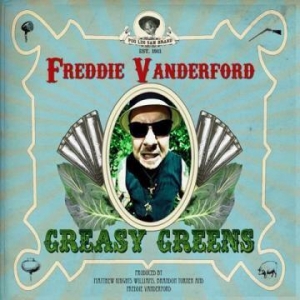 Armed with a harmonica, washboard and guitar, Freddie Vanderford can interpret most any blues, folk, soul, Americana or rock and roll song. With astounding harmonica licks taught to him by the late traveling medicine show performer and Piedmont Blues harpist, “Peg Leg” Sam Jackson, Vanderford can immediately captivate any audience.
As a teenager, Vanderford was introduced to the unique sound of Piedmont Blues. Captivated, Freddie sought out local harpist, Peg Leg Sam. Ignoring the differences made obvious by the late 1960s, the two formed a mutually beneficial relationship where Freddie provided transportation for the black amputee and Peg Leg let Freddie listen to him play. Eventually the strangely-matched pair formed a bond. Recognizing the youngster’s talent, Peg Leg taught Vanderford the sharp harmonica licks that formed the foundation of Piedmont Blues. One of few living links to the deceased minstrel show performer, Vanderford continues the tradition and is committed to passing on the legacy.
Missing his mentor, Vanderford sought kindred spirits to create an environment that would allow him to hone his craft. During the 70s and 80s, Vanderford performed with Charles “Baby” Tate, Drink Small, Napoleon “Nappy Brown” Culp and many others. Later, performing as the Legacy Duo with Alvin “Little Pink” Anderson, Vanderford and Anderson teamed with storyteller, Lorraine Johnson Coleman producing more than a dozen episodes of “Just Plain Folks” for National Public Radio and later toured nationally performing in New York City, Minneapolis, MN, Springfield, MO and other US cities.
In May of 2010, Vanderford was awarded the Jean Laney Harris Folk Heritage Award for maintaining and sharing the tradition of the Piedmont Blues harp. Performing the traditional song, Greasy Greens on the floor of the SC State House, Vanderford brought the Legislature to an immediate standing ovation.
Vanderford entertains audiences playing solo or with fellow musicians such as Brandon Turner, Steve McGaha, Matthew Knights, Fayssoux McLean, David Ezell and many others. His discography includes Piedmont Blues, recorded with Brandon Turner, and Vanderford and Turner are featured on Story, Song and Image: Celebrating the Roots and Ethnic Music of South Carolina. His music is also featured on Feel the Presence: Traditional African American Music in South Carolina and in Stan Woodward’s film BBQ and Homecooking, a documentary on foodways in the state.
Whether he’s playing harmonica on Pink Anderson’s Chicken or playing the washboard to Pink Floyd’s The Wall, Vanderford’s rhythmic, rootsy style enthralls listeners of all ages. Vanderford’s mastery of his craft enables him to coolly shift from melodic ballads such as Johnny Cash’s I Still Miss Someone to Jimi Hendrix’s heart-thumping Purple Haze.
Be sure to see this great blues man every chance you get! “He really is one of South Carolina’s true treasures,” - SC State Representative Gilda Cobb-Hunter.
13
What's This
Advertisement