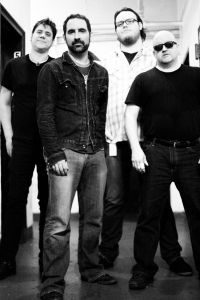 "It's been a long time since a band has come into existence and truly excited me. For the most part, the genre has gotten so stale and commercialized that there's nothing to grab you and get you keyed up and dancing around. I popped in "Reject on Impact" into my CD player, and that changed."
Andrea Caruso - IndependentClauses.com

"For fans of modern punk that avoids sounding too much like manufactured pop, F-Units will likely be a real winner. While “Reject on Impact” is full of familiar moments, it is a fun and entertaining ride that is sure to keep your attention."
Corinne - Pluginmusic.com

"even with this super-polished sound, the band places the entirety of their soul into each and every track on this disc. The disc is bouncy from beginning to end, and they always come forth with a style that is only their own."
Neufutur.com

"This is the kind of CD that you'd have cranked up in the car and you get the feeling you're listening to them live... I was just missing the wild crowd of dancers. If punk is your thing, F-Units has potential."
Unsigned Music Magazine

"I'm gaining a deeper respect everyday for bands like this that still do things themselves instead of looking for that perfect Indie Label to put out their music... This is a debut CD from this band that seems like the beginning of more to come."
Dave Fishwick - The Neus Subjex

Formed in New York City's Lower East Side in 2004, F-Units have created their own personal brand of punk-influenced hard rock while drawing influences from some of the greatest rock bands of our time.

F-Units got their name from diesel engine locomotives built by General Motors’ Electro-Motive Division in the 1940s and 50s — a metaphor for the band’s sound: hard, fast, loud... fueled by power-pop hooks and raunch-rock riffs slammed together with the driving force of a runaway freight train.

F-Units will be releasing their much anticipated 2nd studio album, "Alone in Babylon" on November 19, 2010.