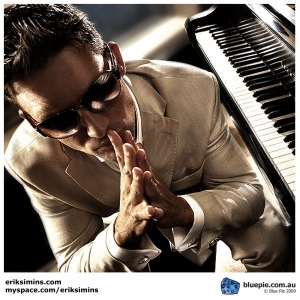 Writing and singing music since he was 10 years old, a platform was formed that helped launch the career of Toronto singer songwriter Erik Simins.

Influenced heavily by the great talents of James Ingram, Earth Wind and Fire, Hall & Oates, Eric Clapton, James Taylor and Prince, Erik’s quest to develop his song writing combined with his formal training in vocals, piano & guitar, has helped him produce a unique hybrid of R&B, pop and folk.

Erik’s upbringing that allowed him to be completely immersed in music, has led to the release his first full-length album. “Please Do Not Disturb” is a mixture of smooth sonically adept mixes and slick alive beats. Collaborating with Juno Award nominee and producer Adam Messinger has resulted in his first hit single “Parents House” that has already received extensive airplay on Canada’s number one urban music station Flow 93.5, considerable recognition across Canada’s Commercial Hit Radio circuit and a spot on Flow’s last two urban Soul compilations.

“Parents House,” along with the rest of the album are being added to FM radio globally. The music video released in conjunction with the single is bringing Erik significant rotation on MuchMusic, MuchVibe and MTV Canada. “Parent’s House” has since topped major play on commercial and independent radio in Canada and created a solid foundation to launch Erik to the world.

Beating out a pool of successful songwriters, “Parent’s House” was selected for the feature track of “Making It Big”, a television show that debuted in Spring to over 35 million households across Canada and the United States. With a number of cameo appearances on the series, Erik was given the opportunity to demonstrate his talents to a much larger audience, guaranteeing him the exposure to gain new fans on an international scale.

Coupled with rave reviews and hit songs, the album has been hailed with numerous gold and silver design awards at the New York Festival for CD design and the Art Director of Canada Design Show.

In 2007 the album charted globally and was top 40 on iTunes, went top 40 on the Australian National ARIA chart and went top 20 on the AIR Independent Charts. The album is one of RnB's top creepers for 2009. "There are just so many great tracks in this collection of songs it is hard to pick a favourite" as Erik says.

His hot new single " Lets Roll " is out now at all leading digital retailers on the planet. This is the third single to be lifted from his debut album " Please do not disturb "

Rated the number one R&B/Soul artist on My Global Sound with “The way I see it” being added to MGS’s compilation disk distributed throughout Miami, Florida, Erik’s popularity skyrocketed with iTunes recognizing his hit potential, placing him not only on their Canadian roster, but on their U.S. and European sites.

Blue Pie Productions are releasing the album world wide with a major marketing and promotional campaign. Erik Simins is distributed for the world by Blue Pie. You can get the album at all leading digital retailers on the planet or ask for the album by name at all leading retailers around the world.

Erik Simins is part of the Blue Pie Family of Artists. For More Information on Blue Pie, please visit www.bluepierecords.com