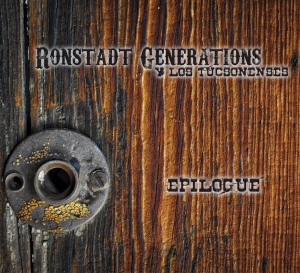 Representing five generations in North America, Ronstadt Generations continues the family's musical traditions with Michael J. Ronstadt (younger brother of Linda) and his sons, Michael G. and Petie. Multi-instrumentalists and solo performers in their own right, they present an exciting repertoire that preserves the traditional South-western and Mexican songs of their heritage. Rich harmonies are accompanied by outstanding cello and guitars. In 2012 three veteran musicians--Alex Flores, Sam Eagon and Aaron Emery --came on board with versatile talents to form the six-piece ensemble Ronstadt Generations y Los Tucsonenses.

About the Album:
The same 2012 recording sessions that yielded the critically acclaimed CD "Prelude" left eight additional tracks unreleased. At the end of 2013, Ronstadt Generations revisited those tracks and finished them. "Epilogue" gives us those eight songs. Listen as Ronstadt Generations delivers their own take on some of their favorites, including songs written by Jackson Browne, Robert Johnson, Paul Simon, Gillian Welch, Muddy Waters, Merle Travis, David Olney and Stan Jones.
12
What's This
Advertisement