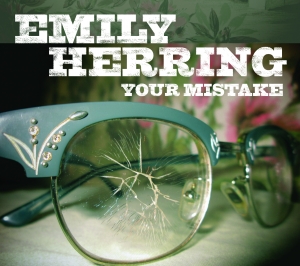 "If it ain’t worth saying, it ain’t worth singin." Emily Herring is a born and bred Texan, with a Marty Robbins yodel and an outlaw sound as big and varied as the state from which she hails. She is equally a player and a lyricist, with influences of traditional country, Tejano, western swing, and southern blues. It is her voice, however, that sets her apart from the rest. Emily pulls no punches. Hers is hard-hitting-no-frills country, sung with a distinctive twang.
During her three US tours, Emily played in venues all over the country including the Midpoint Music Festival in Cincinatti, The Howlin' Wolf in New Orleans, and Folk Alliance. She played music for ten years in Portland, OR, before moving back to Texas in 2010 to be closer to the heart of the country music she lives for. She currently lives in San Marcos, where she plays all over the Hill Country as a solo act, and with her band Emily Herring and Henpecked.
In turns dazzling and stark, “Your Mistake” is a love letter and a warning, a honkytonk when the lights come up, the ring of the last change in your pocket as you spend it on the only beautiful girl in town. Herring’s songs are poetry, wrought with pedal steel, dobro, telecaster, a careful reverence, and an honest eye. Stretching across Texas and the new West, the songs on this album recall the last fifty years of country music in a sound all their own.
21
What's This
Advertisement