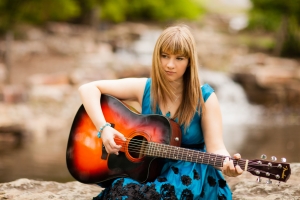 “If you like country music then you will love Elaini and if you don’t like it, you will once you hear her sing.” So said Tommy Neal of Stars 2 Come Magazine. Hailing from Hollidaysburg, PA, Elaini Arthur sings with the voice of a country angel and her songs are heart-felt and reminiscent of that grand old country style made popular by the likes of Patsy Cline and Loretta Lynn. Elaini Arthur is at once fresh and familiar with her new songs and old soul.


“My musical journey started when I was five years old, after hearing my first Patsy Cline song called Honky Tonk Merry Go Round,” says Elaini. “There was just something in her voice that stuck with me,” continues this bright new talent. Referring to Patsy Cline’s ability to put so much of herself into her songs, Elaini says, “That will be something that will stay with me always.”


Indeed, her connection to Patsy Cline shows in her songs. At the age of six, Elaini Arthur entered the Patsy Cline Sing a Song contest and sang “Walkin’ After Midnight.” Country music legend George Hamilton IV was in attendance. After hearing Elaini sing, this country icon was moved to say, “Patsy would have been there with her arms around her.”


Elaini has performed in Nashville at the Nashville Palace and Tootsies as well as smaller venues such as the Lebanon Grand Opry House in Ohio. She has appeared on the Nashville Spotlight Television Show and the Shotgun Red Variety Show and Elaini’s giving nature presents itself in her appearances on the Make A Wish Truck Convoy and other charitable events.


She has performed regularly at “Joltin” Jim McCoy’s Troubadour Lounge in Berkley Springs, West Virginia. McCoy was one of the first to notice the enormous potential in Elaini. Many years ago, he noticed similar potential in another young girl and put her on the radio. She was an unknown. Her name was Patsy Cline.


Among the numerous instruments Elaini plays are the guitar, ukulele, autoharp, and banjo. She studies voice with vocal coach Susan Gabrielle and has been mentored by none other than “Joltin” Jim McCoy himself.


Her new single, “Sweet Kisses,” will be released this summer on McCoy’s Troubadour Records label.


Truly, the music world has found something unique in Elaini Arthur. A singer with a sound that will bring many listeners back the days when country music was young. While the people of her own generation get a chance to experience this sound live, maybe for the first time. ​
0
What's This
Advertisement