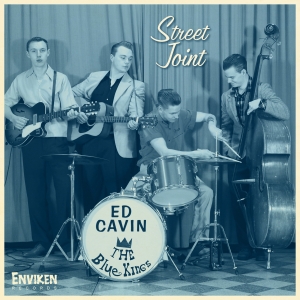 The Bop Won’t Stop
It has been a pleasure working on this release by Ed Cavin & The Blue Kings, I really got some flashbacks back in time to when I started out myself.

And it sure is a joy to be able to bring a new generation of Swedish rockers to the world.
Some of these guys are sons to artists that I have released records with in the past so it is great that the tradition is being past on.

These youngsters made an immediate impact back in 2016 when we released a video for their version of the classic song ”Love Me” originally by The Phantom, as a result they got requests for gigs not only in Sweden but also around Europé and they sure went down a storm when they hit the stages.

In 2017 we released a limited edition 7” with the self-penned track ”Don’t Be Like That” and the aforementioned ”Love Me” on the flipside. It further spread word about the band around the globe.
And the 7” is now almost sold out.

Not bad for a couple of local teenagers from the Enviken area that barely had a drivers license when they started out.

Now it is time to release their debut album and what an album it is!
”Street Joint” is filled with prime 50’s style rockin’ music delivered with that youthful enthusiasm just as it was back in the day.

16 tracks all in all, Fast paced rockers, midtempo boppers and a couple of slow numbers makes the album a treat. It is no doubt that this album will take the band to stages where they have never been before.

We get a selection of covers and original songs, although they sure have put their own mark on the covers, just listen to the Lightnin’ Hopkins song ”The Life I Used to Live” here turned into a SUN styled Rockabilly tune. Ring a bell?