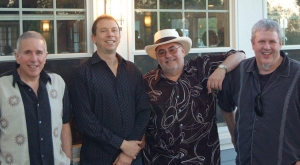 
EDMONTON, AB – Stony Plain Records announces a September 23 release date for Calling All Blues, the new album from The Duke Robillard Band, led by the two-time Grammy nominee and multi Blues Music Award winning guitarist. In addition to the CD release, Calling All Blues will also be available as a 180-gram premium vinyl LP. The first 600 LP copies of the new album will include a special song notes insert signed and numbered by Duke, himself.

“I envisioned this as an album of blues and blues related, mostly original songs that touch on a few of the many styles of American music based on the blues,” says Robillard in the Calling All Blues liner notes. “We hope you enjoy our journey though these styles as we hit many of the sounds of cities and states where these blues and soul styles developed.”

That journey covers many destinations, from the Memphis-styled “Down in Mexico” (the album’s opener); through the slow blues groove of “Blues Beyond the Call of Duty” (featuring a sensuous vocal reading by Sunny Crownover); a Stax/Volt soul stopover on “Emphasis on Memphis” (co-written by Grammy winner Gary Nicholson and Ron Sexsmith); the Frankie Lee Sims influenced one chord boogie of “Motor Trouble;” the lowdown Texas blues of “Nasty Guitar;” and “She’s So Fine,” a cover of one of Duke’s favorite tunes by 1960s Alabama blues and soul band, the Carter Brothers.

In addition to Sunny Crownover’s lead and background vocal contributions throughout, keyboardist Bruce Bears steps up to the vocal mike on “Confusion Blues,” a swing/jump song that sounds and feels like something right out of the Mose Allison songbook.

On “Svengali,” Duke invokes memories of Howlin’ Wolf’s “Forty-Four” and “Vicksburg Blues,” with some lowdown guitar tones by the Duke-ster played on vintage guitars and assorted “kitchen-sink” percussion work by Mark Teixeira. “This is one of my favorite tracks on the album,” Duke confesses. “I tried to create a sound stew here with several stringed instruments. For the percussion, we wanted to get a Peck Curtis effect, but had no pots or pans to use at hand, so I located two full bottles of wine that gave a good effect when played intermittently with the toms.”

Prior to the beginning of recording the album, Duke had an accident that resulted in a broken hand, so as any good musician will do, he improvised on “I’m Gonna Quit My Baby.” “I played a slide solo with my broken hand with a brace on it and my two middle fingers taped together,” he recalls. “That accounts for the slightly out of tune funkiness of the slide solo!”

Calling All Blues continues on the path Duke Robillard forged in 1967 when he founded the iconic Roomful of Blues, held down the guitar spot in The Fabulous Thunderbirds (following Jimmie Vaughan’s departure from that band), his work with rockabilly maverick Robert Gordon and two albums with the Legendary Blues Band (a sterling group of former members of Muddy Waters’ bands). In addition, Duke has logged countless gigs over the years as both a producer, bandleader and guitar player with a plethora of giants of blues, roots and jazz music. That laundry list includes late icons such as Joe Turner, Jimmy Witherspoon, Eddie “Cleanhead” Vinson, Jay McShann, Rosco Gordon and Herb Ellis, as well as contemporaries Bob Dylan, Dr. John, Jay Geils, Joe Louis Walker, Billy Boy Arnold and Kenny “Blues Boss” Wayne.

Since 1980, Duke’s been a touring bandleader for 98% of the time with nearly 30 albums to his credit under his own name. He is the true link from those great artists of the past to the current and future of roots music. With the recent passing of Johnny Winter and the aging of other blues elders, Duke continues to carry his blues torch held high, leading the music from the wilderness into the light. In recognition of his lifetime achievements, he was recently inducted into the Rhode Island Music Hall of Fame in May of 2014.

As acclaimed producer and Blues Hall of Fame member Dick Shurman said upon hearing the new CD, “Duke and his seasoned band bring a sublime mastery, a bold authority and some of his best songwriting to Calling All Blues, a diverse but cohesive survey of the many blues-based musical facets at they’re gratifying command. Heed the Call!”
27
What's This
Advertisement