The Dream Syndicate - The Days Of Wine And Roses 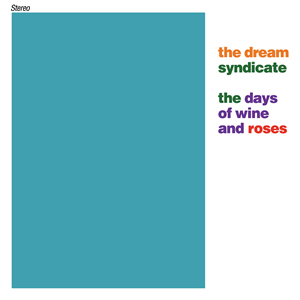 The Dream Syndicate’s debut album, The Days Of Wine And Roses, has long been considered a cornerstone release of the early ’80s Paisley Underground scene. However, it was more influential than that, and is one of indie-rock’s essentials.

The original Steve Wynn/Karl Precoda/Kendra Smith/Dennis Duck line-up took seminal ’60s rock and filtered it through more modern sounds. In fact, it was Flesh Eaters’ front man Chris D., who produced The Days Of Wine And Roses, who got it released on Slash Records—one of the premier L.A. labels of the punk rock era.

Despite its seminal status, The Days Of Wine And Roses has been out of print for the better part of a decade. With the rebirth of the band as a live/touring unit over the past two years, Omnivore Recordings has remastered and expanded this gem.

Calling on the band’s long-time archivist Pat Thomas, the CD now contains a slew of never-before heard recordings that capture the first year of the classic Wynn/Precoda/Smith/Duck line up in all their lo-fi glory! Bonus tracks from previous editions have been replaced by rehearsal tapes that capture two songs that later turned up on Medicine Show, as well as four songs that no one has ever heard, including a nearly 10-minute Krautrock inspired jam! Long-time fans have often wondered what it would have sounded like had Kendra Smith stayed in the band for a second full-length album, now we have the answer—less ’70s FM rock, and far more Marquee Moon-era Television!

A revamped booklet includes new notes that describe the source of the vintage recordings—plus fresh testimonies from their peers; members of the Rain Parade, The Long Ryders, Divine Weeks, and Sonic Youth weigh in about the first time they heard The Days Of Wine And Roses.
2
What's This
Advertisement