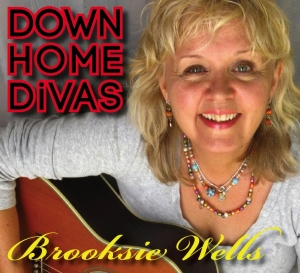 Bio:
Brooksie Wells is a New Hampshire-based singer-songwriter with a history of activism reflected in her work. After growing up in the South with parents who fought for Civil Rights and the Equal Rights Amendment, Brooksie migrated to New York City in the 1970s, where the thriving folk scene heavily influenced her music.

Discovered by Bobby Darin at the age of 19, Brooksie wrote for years for Chappell Music, with several of her songs used in recordings and movie soundtracks. She later performed with John Lennon's band Elephant's Memory and as a singer with Kid Creole and the Coconuts. (Kid Creole's recording "Off The Coast Of Me" has just been re-released).

"Down Home Divas" is Brooksie Wells’ definitive release, featuring “Lily,” "True Love," "Lost in the Music," and a total of 11 original, provocative acoustic tracks performed by an all-star female band.