Dirk Powell - When I Wait For You 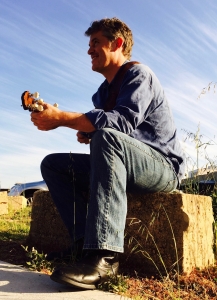 enowned producer, songwriter, fiddler and sideman Dirk Powell has achieved near legendary status in the international roots music scene. His bonds with Louisiana and with the mountains of Kentucky are unmistakable, but so is his far-reaching vision and ability to translate the essence of tradition for modern audiences that need the timeless and sustaining messages that tradition brings. Powell’s new album, WHEN I WAIT FOR YOU contains 13 tracks, all but one of which are original. The songs showcase Powell’s gritty vocals—reminiscent of Levon Helm in one moment and his mentor and former father-in-law, Cajun legend Dewey Balfa, in the next—and penchant for catchy melody set against a soundscape of fiddles, accordion, whistles, harmonica, and rhythm section. Donald Shaw (Capercaillie) co-produced the album, which was recorded in Louisiana and Scotland and features special guests Rhiannon Giddens, Sara Watkins, Sean Watkins, Mike McGoldrick, and John McCusker.

The album title addresses the listener directly. “My hope is that the phrase ‘when I wait for you’ feels personal to whoever listens to the record—that this is the music I write and create in those moments,” Powell explains. “I want the listener to feel that phrase addresses them personally.”

The album art, an assemblage of objects meaningful to Powell assembled on his home piano, provides more clues to the meaning behind the title. Especially the playing cards.

“I have found two jacks in my life, from decks of cards, randomly, just lying alone,” Powell says. “For me, these are symbolic. I still can’t believe that I found them—a jack of diamonds on the street in Dublin, completely alone, laying face down on a dark, urban sidewalk, and a jack of hearts in Germany, in a field on an island in the middle of the Rhine. It is the German jack, so it has a B on it rather than a J. I identify with what the jack represents in many ways. Not a king, necessarily, but someone who is often tasked with bringing out the best in others, being in service in creative ways. Perhaps someone moving more in the shadows than declaring things from a throne. So in the cover art there are these jacks, particularly the jack of hearts, in the space of goddesses whose energy I feel and for which I’m grateful. The shadow on the Jack of Hearts is something like a yin yang pattern… half in shadow and half in light. These are feelings that resonate with me, tied to this project.”

Dirk brought Shaw, McGoldrick and James Mackintosh from England and Scotland to his Louisiana studio. With his mother ill at the time, he couldn’t drive the three hours from Lafayette to New Orleans when they flew in; they settled for a Greyhound trip. “That was diving into the Louisiana experience, directly and fully, in the most real way,” Dirk says with a laugh. Immersed in his studio, located on the banks of the Bayou Teche, they worked on the songs. “It was beautiful to feel their Celtic sounds merge with the old cypress wood of the walls, and the humid air, and settle into the energy of this place,” he says.

Other friends were brought in to help take things a little further—Sara Watkins, who adds her soulful energy, talent, and virtuosity, and Rhiannon Giddens, who is one of Powell’s closest friends and musical collaborators. (Powell co-produced her 2017 release FREEDOM HIGHWAY and her 2019 collaboration with Leyla McCalla, Allison Russell and Amythyst Kiah, SONGS OF OUR NATIVE DAUGHTERS.) He even enlisted his daughters, who grew up with a lifelong love of harmony, to add background vocals.

“Creating with them in the studio, and letting all the music we’ve listened to over the years flow into new art together, was a beautiful thing.”

Powell says that WHEN I WAIT FOR YOU is a less “aggressive” album than his previous releases, not in intensity but meant more as a “magnet” to audiences rather than something projected to the listener. It’s an intimate group of songs presented as an invitation into his world – his studio, friends, family and home, realized not as a “concept” but as something that grew naturally in a warm and present way.

Over the course of his career, Dirk Powell has recorded and toured with Eric Clapton, Joan Baez, Rhiannon Giddens, Linda Ronstadt, Jack White, Loretta Lynn, and many others. His work in film, including Cold Mountain, found him collaborating with producers including T Bone Burnett, and directors like Anthony Minghella and Ang Lee. He was a founding member of the important Cajun group Balfa Toujours and has been a regularly featured artist in the award-winning BBC series THE TRANSATLANTIC SESSIONS. WHEN I WAIT FOR YOU is the follow up to his 2014 Sugar Hill release WALKING THROUGH CLAY.

Blending his deep understanding of American roots music with a unique ability to weave traditional sounds into a contemporary musical tapestry, Powell has delivered one of the freshest and most engaging folk and roots albums of the year.

Blending his deep understanding of American roots music with a unique ability to weave traditional sounds into a contemporary musical tapestry, Powell has delivered one of the freshest and most engaging folk and roots albums of the year.
8
What's This
Advertisement