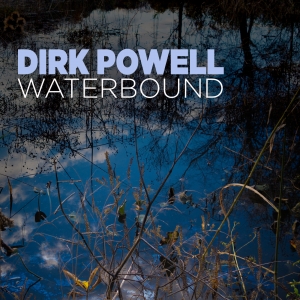 Renowned producer, songwriter, fiddler and sideman Dirk Powell, in the wake of his acclaimed Compass Records debut, WHEN I WAIT FOR YOU, has released a new recording of his beloved song "Waterbound" as a single through all digital service providers. Recorded in Dirk's home studio in Lafayette, Louisiana in September 2020, this version includes guests Mike McGoldrick (flutes), Donald Shaw (accordion) and Rainy Eyes on harmony vocals and is a marriage of British Isles and Appalachian folk music. It's a song close to Powell's heart and was inspired buy his fiddle-playing grandfather in Kentucky.

Dirk spoke to Folk Radio UK about the origins of "Waterbound."

"It’s been twenty years or more since I wrote Waterbound. More than any other I’ve written, it’s a song that seems to resonate across boundaries and means different things to different people. As an artist, it’s a very satisfying thing when a creation seems to take on a life of its own. I started working on this version as a powerful Louisiana thunderstorm rolled in, so I decided to record the rain and incorporate it into the track. At the beginning, you hear me open the first of the double doors to the studio and then the second, when the rain really gets loud. Mike McGoldrick and Donald Shaw went fully to the same place, from across the Atlantic. Mixing their tracks in was a beautiful experience, as was adding Rainy Eyes on harmony vocals, with her uncanny ability to match the timbre and feel of my voice while adding the soulfulness of her own. This song is also special to me because it ties to my grandfather, JC Hay. He was the one who carved his name on an old barn wall, where I saw it a good 70 years later. I’m grateful to have been asked to create this new version. "

Powell has achieved near legendary status among his fellow musicians in the international roots music scene. His bonds with Louisiana and with the mountains of Kentucky are unmistakable, but so is his far-reaching vision and ability to translate the essence of tradition for modern audiences that need the timeless and sustaining messages that tradition brings.

Over the course of his career, Dirk Powell has recorded and toured with Eric Clapton, Joan Baez, Rhiannon Giddens, Linda Ronstadt, Jack White, Loretta Lynn, and many others. His work in film, including Cold Mountain, found him collaborating with producers including T Bone Burnett, and directors like Anthony Minghella and Ang Lee. He was a founding member of the important Cajun group Balfa Toujours and has been a regularly featured artist in the award-winning BBC series THE TRANSATLANTIC SESSIONS. WHEN I WAIT FOR YOU is the follow up to his 2014 Sugar Hill release WALKING THROUGH CLAY.

Blending his deep understanding of American roots music with a unique ability to weave traditional sounds into a contemporary musical tapestry, Powell has delivered one of the freshest and most engaging folk and roots albums of the year.
4
What's This
Advertisement