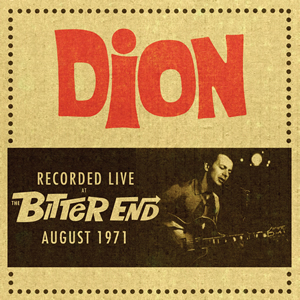 Dion DiMucci helped define rock music for generations. From initial doo-**** hits with The Belmonts in the late 1950s, to going solo in the ’60s with smashes like “Runaround Sue,” “The Wanderer,” “Ruby Baby,” and the iconic “Abraham, Martin And John” in 1968, Dion was revered by the listening public. Even The Beatles featured his photo on the cover of Sgt. Pepper’s Lonely Hearts Club Band. (He’s next to Tony Curtis above John Lennon’s head…)

Omnivore Recordings is proud to present Live At The Bitter End, August 1971, an unissued live performance. With only his pure voice and an acoustic guitar, Dion moves through his catalog flawlessly—putting listeners in the club with him. This is Dion at his best, at the beginning of his third decade as a star.

In addition to the aforementioned hits, Dion presents his then new material like the singles “Your Own Back Yard,” “Sunniland,” and “Sanctuary,” while classics like “Too Much Monkey Business” and a stunning version of The Beatles’ “Blackbird” help round out the set.

Music had changed since his first release in 1958, and Live At The Bitter End, August 1971, proves that Dion was not only an innovator, but an artist who could transcend genres while still staying true to what made him a legend.

As Lou Reed said while inducting him into the Rock and Roll Hall of Fame, “After all, who could be hipper than Dion.”