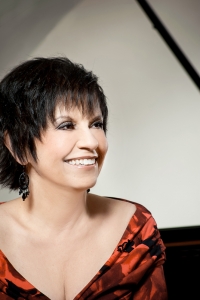 When you combine an accomplished vocalist, an accomplished pianist, and accomplished arranger all in one individual, you have the dynamic Diane Marino.
M&M Records Recording Artist Diane Marino has recorded, performed, and shared the stage with jazz legends Houston Person, Joe Henderson, Wycliffe Gordon, Pete Escovedo, Tania Maria, Kirk Whalum, pop music icon Felix Cavaliere and many others.

Diane’s CD "From The Heart” (2011) clearly defines the artist. An eclectic blend of Vocal and Instrumental Mainstream, Brazilian and Latin Jazz..... Creative and refreshing arrangements...along with stellar performances by all. A definitive collection of favorite tracks – from Diane’s 3 previous CD’s, all completely re-mastered.

Having a passion to “Build Bridges Across Jazz Lines”, Diane arranged and blended the elements of contemporary, traditional, smooth and Latin jazz with great pop standards from the sixties. This creative mosaic of music led to Diane’s ‘Just Groovin’ CD in 2008.
Critically acclaimed, “‘Just Groovin’ is a stellar collection featuring twelve wonderful re-interpretations of pop standards from the sixties. These are not copies of other versions. Diane's fantastic voice and arranging is a breath of fresh air for these tunes, reminding us once again that a great song can be interpreted in any number of styles”… Bob Perry – The Penthouse Radio.

Diane’s debut jazz quartet CD ‘A Sleepin’ Bee’ was released in 2003 and has received national acclaim charting #25 on the national JazzWeek charts as well as receiving extensive radio airplay and rave reviews. This CD offers a wide array of vocal and instrumental traditional jazz standards, Latin jazz, and Brazilian jazz (sung in Portuguese).

Diane’s second CD ‘On the Street Where You Live’, released in May of 2004 has also received national acclaim charting #31 on the national JazzWeek charts and proves once again that Diane is a natural whether playing, singing, or both. This CD will take the listener to the very depths of emotions. There is a re-current theme throughout that tells stories of love, and love lost, as well as playful gems of Latin and Brazilian jazz. Diane is joined by bandmates Frank Marino (bass), Mitch Reilly (saxes/flute), and Chris Brown (drums).


Singer/pianist Diane Marino was born in Manhattan, NYC. She received her early piano training of classical studies and improvisation from the age of 10. Diane was accepted on NYC’S ‘Famed’ High School for the Performing Arts as a classical piano major. She later attended and graduated from Mannes College of Music in Manhattan where she studied piano with world-renowned concert pianist Murray Perahia.

Diane’s CD’s continue to receive airplay both home and world-wide. Read the great reviews on www.dianemarino.com

"All 12 songs (Just Groovin’) are catchy tunes made decidedly more interesting by the bluesy Marino and an assortment of first-rate guests." - Christopher Louden, Jazz Times

"On The Street Where You Live" "Diane Marino gives a new and exciting twist to some venerable standards and deftly performs a few relatively rare tunes”…“A Sleepin' Bee"- "Jazz in its purist form." - John Gilbert, Jazz Review

"It’s fabulous… My prediction? “Just Groovin’” is one of the strongest vocal releases of 2008. " - Dr. Mike Metheny, Radio IO


"A SLEEPIN BEE"
“I love this recording!
Often when a band plays to its strength in the studio the results can be one-dimensional after a couple of tracks.
Don’t worry about that happening on “A Sleepin Bee”. The Diane Marino Quartet offers a showcase CD spreading strong performances with a broad brush of musical styles. From a playful burner like the opening ‘This Can’t Be Love’; to Jobim’s lilting ‘Double Rainbow’ (with delightful flute playing by Rusty Jessup and Portuguese lyrics sung effortlessly by the pianist/bandleader Diane Marino); to Charlie Parker’s sly
‘My Little Suede Shoes’ featuring a fine conversation by Frank Marino & Chris Brown (bass & drums respectively); to ballad/blues straight out of that soulful Etta Jones/Houston Person bag, and this group’s strong across the board. And there’s more, a lot more, inside ‘A Sleepin’ Bee’ by the Diane Marino Quartet.
It’s one to take home."
WMOT JAZZ-89.5 TN
Greg Lee, PD

A plus for the jazz world…I was very impressed. We play real jazz here on jazz 88, and you are real jazz.

Whoa…blew me away!! Incredible vocalist and pianist!

A true diva; a superb singer and pianist. A swinging bossa nova singer, and a very appealing voice.

What a great variety and pleasure, jazz to the max on this CD. Great stuff!

An excellent CD. The title track is superb and I’ve been getting excellent responses from my listeners. Simply wonderful!

“A Sleepin’ Bee” by Diane Marino has been the most wonderful Jazz CD I’ve received this year. Can’t have a favorite because we’ve played all of them. Also the Portuguese tracks are soft and wonderful. Excellent work from a wonderful vocalist and quartet.

This is a classy CD! Especially Track #13…I’ve never heard “Killer Joe” recorded in such a classy fashion. Track #4 (You Don’t Know What Love Is) really shows Ms. Marino’s beautiful voice. She sounds like a pre-Ella Fitzgerald. A baby Ella as I’ve been calling her. The band is great as well. This Cd is not “sleepin’’! I really love it.


"This CD offers everything the Jazz aficionado could wish for and then some! This is jazz in its purest form presented in a remarkable tableau of artistic grouping."
JAZZ REVIEW
John Gilbert

"If this smoking debut disc is any indication, Marino is destined for great things. She is much more than just another pretty face doing some singing and playing some piano. She has a clear vision of what she likes, what her strengths are, and how to best put it together."
CADENCE MAGAZINE
Bud Koppman


Diane Marino takes the listener on a musical journey with her interpretations of the Jazz evergreens on this CD. From a playful burner like the opening “This Can’t Be Love”; to Jobim’s lilting “Double Rainbow” sung in Brazilian Portuguese; to Diane’s dark and haunting vocal on “Don’t Misunderstand”; to the refreshing Latin instrumental arrangements of “All Blues” and “Killer Joe”.
TN JAZZ & BLUES SOCIETY
Chuck Chellman

"J'ai Si Peur" Duet Diane Marino & Robert Lauri
MusicDishTV | December 09, 2010 .The very talented Diane Marino and Robert Lauri combine their musical worlds in an "international" duet of harmony and synergy in a French recording entitled "J'Ai Si Peur" (I'm So Afraid). The arrangements were done by Robert Lauri, who also composed the music along with Danielle Bennaim, with lyrics by Claudine Marousek-Dornhakl. The Marino-Lauri duet is unquestionably successful: Diane's voice complements Robert's beautifully, and the performance by both artists releases a magical harmony that tells the story of a couple who has been through the ups and downs of life and seen bad times, but who finally has found a love so strong and pure that they are finally no longer afraid anymore. Romantic to the core, whether you parlez vous Francais or not, you will enjoy this emotional and heart wrenching performance.
Website: http://www.robert-lauri.com/dianemarino/