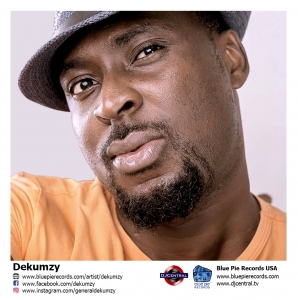 Derek Osonwa, professionally known as Dekumzy, is a Nigerian record producer with many talents beyond just that! He’s also a musician, a composer, a pianist, and a songwriter. His first major production was the album of the Duo “Resonance” titled “Chinweike” in 2006. Since then he has gone forth to work with the likes of Mr Raw, Flavour N’abania, Bracket, Dr Alban, Charly Boy among others. He’s been taking the world by storm in his own way, and Spotify is loving him for it!

Born in Enugu, Nigeria on 27 March 1983, Dekumzy started his musical journey when he joined Federal Ex Students Christian Association (FECA) in the year 2000. Just like every other passionate musician, he took the bull by the horns early in life, and he played the keyboard and sang in the choir on FECA’s behalf. Later, he founded the now defunct Girl Band Trio “Desperate Chicks”, comprised of Stormrex, Ursula Ice and Barbie. The member known as Ursula Ice eventually became his wife, and she and Dekumzy conceived 2 sons. Stormrex went solo, adapting the style the trio were known for into her own brand.

At the time of writing, Dekumzy’s flagship song is unquestionably “Who Get That Thing”. With tens of thousands of plays across both Youtube and Spotify, this track has united tons of listeners across the internet and driven Dekumzy’s following that much further along! But that’s just one part of his library – his tunes run deep, both in volume and into your soul! You can feel them!

But with being a producer comes all sorts of other amazing milestones aside from just singing! His career led him to produce the theme song for the Nollywood Movie “A Million Tears” titled “Treasure” featuring Kate Henshaw. Other highs from his journey include the production of the music collaboration between Dr Alban and Charly Boy on the remix of “Carolina” in 2009, as well as the production of 8 tracks from the second album of Bracket “Cupid Stories” in 2011. He’s done far more than just this handful of achievements, though, so be sure to check out his social media links to find out more, and we’ll see you there!