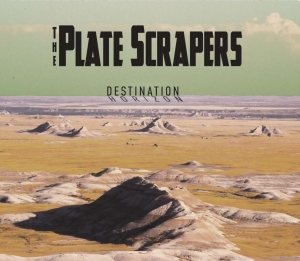 From the banks of the Shenandoah River, from the hills of the Back Creek Valley, and from the peaks of the Allegheny Mountains, The Plate Scrapers announce their third studio album, Destination Horizon. The 13-song collection serves as a portrait of the band’s fluid genre-bending sound and, more importantly, the shape of what’s to come.

“This album is like a snapshot of what we've been doing as a band for the last few years,” says vocalist and banjo player Derek Kretzer. “It’s both where we've been hanging out with our sound and where we're going. ‘Last Train’ is the second song I ever wrote for The Plate Scrapers and there’s some brand new stuff on the record, too, so it spans almost the whole length of the band.”

Opening with the festival-spirited “Fly With Me,” Destination Horizon takes you on a ride down lonesome railroad tracks and a narcotic-fueled trucking misadventure, into the magic mountains and through the mystical realm, on a hell-bound motorcycle ride and broke down on the side of the road.

The group’s instrumentation and underlying format are centered on bluegrass, but each member’s diverse background brings a brand new mix of sounds to the table. This leads to a mix of straight-ahead barn burners, country-soaked ballads, and even psychedelic jams. Distorted guitar, fuzzed out dobro, and envelope-filtered banjo are tucked in between sweet acoustic numbers.

“It's old and new at the same time. New classic stuff,” says guitarist/vocalist Andrew Jordan. “We have multiple feels and sounds, so it's hard to pin it down. It's that new bluegrass stuff, that's influenced by all the non-bluegrass stuff we know and love.” Although Jordan was raised playing in his family’s traditional bluegrass band, you can hear his heavier influences on the songs he’s written. “I love bluegrass and I love to rock and get weird, so we do that!”

Destination Horizon is set for a June 5th release date. It is available for pre-order now through BandCamp (digital and CDs) as well as Amazon, iTunes, Google Play, and more.