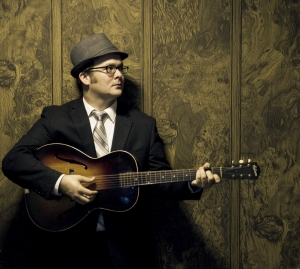 Derek Hoke has said goodbye to rock n roll. Kind of. At least thats what he sings in the opening lines of his new solo debut album, Goodbye Rock N Roll. But Derek, what oh what, did rock n roll ever do to you to make you leave her so? The story might end on the streets of Nashville for now, but his love affair with music, even his erstwhile love rock n roll, began long ago amongst the South Carolina country side and Hee-Haw reruns on Sunday evenings.

Born in Brunswick Georgia - a self taught guitarist, composer, singer, and loner - Derek's first love was the theatrics of KISS, but not until his Grandfather planted the country music seed in his brain by playing it constantly while he was young. Not your dad's country, your granddad's country. The REAL country.

After one listen to Goodbye Rock N Roll, it is apparent young Derek was listening. Like most in his line of work, Derek has moved around. While growing up in Florence South Carolina, his parents divorced when he was 6. He cut his teeth playing guitar in bars around the state, moved to Greenville North Carolina when he was 18, worked in record shops and movie theaters, immersing himself in art and music.

After a few years and visit to Nashville Tennessee to see the likes of Steve Earle, Lucinda Williams, and Los Straightjackets, Hoke decided to move to Nashville. He slept on floors in crowded houses, played around town in almost every venue that would have him, went on tour working for Ricky Skaggs for 3 years and saw almost every state in the union. While these all seem to sideline Derek on his way to becoming the artist he is these days, they were clearly important on his body of work and sound. He is a man that embodies his experience, both with his constant relationship with music and his travels in life.

Now at home in Nashville, Derek started recording what would be Goodbye Rock N Roll in the winter of 2008 with producer Dexter Green. It was time to capture his sound and that's exactly what he did. The result is a "throw-back " record with a modern flair. No Nudie Suits required here. Sit back, sip a drink, and the sounds take the listener to a river honky tonk somewhere in the American south.

"The Finer Things" is a standout dance number where the singer explains he "just wants the finer things in life", such as "a 3-legged dog, a beat up truck ... a 2-dollar suit, a longneck bottle ... a mean ol' woman I can call my wife"..... naturally Derek. We feel you. "Where'd You Sleep Last Night" is another polished mover. A song that gets you singing along like you've heard it a thousand times. The best part is, you HAVEN'T. This is where Hoke excels over and over again, with great melodies and rhythms so familiar you assume they might be covers.

Well, guess what, they're not, they just feel classic. "Patsy Cline's 'Walking After Midnight' was a constant inspiration," says Hoke about the album's inspiration. "I want to write songs like THAT." Not good times all the time, "End of The River" finds Derek recalling his hometown, and trying to find himself amongst his early memories.

Any which way you cut it up, Derek Hoke might have travelled a long road, but he is just getting started. In the bluegrass world, they introduce every player in the band and their home town. Well, keeping with the simple traditions he seems to admire and capture so well, ladies and gentleman, I give you Derek Hoke. From Nashville Tennessee. Of Music City he says "It took me a long time to get here ... this IS my home."

Come to think of it, after spending an evening with this record, I don't miss little ol' rock n roll at all.