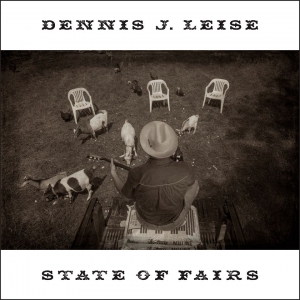 FOCUS TRACKS:
"Listen With Your Eyes"
"My Truck Drove Away With My Wife"
"King Of The Rock And Roll Jungle"
"Nobody's Comin'"


BIO:
We all love the whole “road less traveled” thing, but Dennis J. Leise (pronounced "Ly-See") is more of a “road never traveled by anyone ever” kind of guy. He’d been playing the clubs in Chicago, rounding out solid bills, pulling his share of the crowds, all the while paying out the nose for the privilege of Chicago’s noise and crime. So, he did what absolutely no one would do in his position, and set out for the greener pastures of… Gary, Indiana. And he found greener pastures: he plunked down for a small farm and started raising pigs, goats, chickens, and other animals. He’s done his time performing and recording with various country, jazz, blues, and rockabilly outfits, and No Depression described his recent offerings as “infectious,” with a “darker and sharper perspective.” But his move was a full restart, so while listening to Gospel music one Sunday on local radio, something occurred to him: you can believe in the music without believing in The Guy. So, he locked himself in the outhouse and wrote what was, as far as he knew, the first and only Atheist Gospel songs. But this is no self-righteous takedown, brothers and sisters; nope, it’s some good old-fashioned, rollicking, uplifting, sing-it-to-the-rafters Gospel about being good just because it feels so darn good to be good.

The overreaching theme of the record is this: Everyone is trying so hard to make it, that they have lost track of the fact that what they are trying to make it at, is garbage. From the sublime to the ridiculous across a host of styles, something for all.