Dennis Dougherty Get the Angle Right 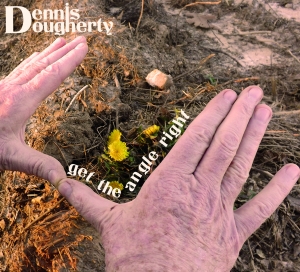 Sister: Does Dennis have to sing so early in the morning?
Mother: Apparently yes, does it bother you?
Sister: Yea, because he shakes his crib and it bangs against the wall.
Mother: I’ll try to get him to calm down, anything else?
Sister: Tell him to learn the words.
Mother: Patty, you know Dennis doesn’t know how to talk yet.

Getting run over by a 1956 Buick at 60 years of age can really motivate you to get your ducks in a row. After the near-death experience, Dennis Dougherty decided he needed to leave behind the comforts of suburban life and get back in the studio to make the best record of his life. Exactly 25 years after his 1991 album Pony Ride, Dennis is back with Get The Angle Right. The record seamlessly brings together folk, country, cajun rhythms, and other roots influences to produce a sound truly deserving of the title Americana. For his first proper studio album in more than two decades Dennis pulled out all the stops and gathered an immensely talented group of musicians including Robb Ladd (Don Henley), Robert Sledge (Ben Folds), Andrew Marlin (Mandolin Orange), and Allyn Love (Steve Wariner). With the group locked in around Dennis' lead, most tracks were cut live giving the album a classic organic vibe that old school Country fans will love. Get The Angle Right turned into a family affair with Dennis' wife Charlyn contributing accordion, his son Jarrett (drummer of punk rock underground heroes Screaming Females) managing the album's release, and youngest son Connor taking care of social media and web-design. Dennis has graced stages with acts such as Lucinda Williams, Richie Havens, and Roger McGuinn and written with songwriting legends such as Steve Gillette, Fred Koller, and Stan Lynch (Tom Petty).