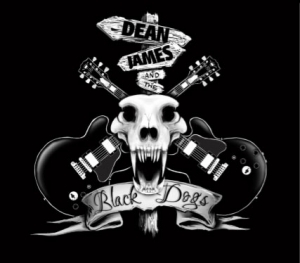 Review of "TRUTH"
A full version of my review of
'Truth' by Dean James and the Black Dogs.
(An edited version is published in the September edition of 'Blues In Britain' magazine)

This is one seriously good album! Dean James writes powerful music on some deep topics, and his voice bears all of the angst of many great blues singers, achieving his listener’s empathy from the moment he starts to sing.

Dean’s potential was clear on his first album, ‘Pure’, released in April 2016, full of songs about depression, the plight of refugees, and the like. His style and strong lyrics probably wouldn’t be for listeners to Smooth Radio as they drive to church on a Sunday, and thank the Lord for that! However, the album and his live performances did enough to impress the men behind the relatively new management and publishing company GEM (Global Entertainment and Media), and to persuade them to sign Dean for their record label.

One of the company directors is Nashville-based Geoff Wilbourn, who has worked with the likes of Johnny Winter and David Honeyboy Edwards. He did the production work on ‘Truth’, and his engineer Adam Taylor had a major input, whilst the album was also mastered in Nashville by Eric Wolf. Needless to say, the sound quality throughout the album is superb.

The title of the opening track on ‘Truth’ may be anathema to many blues lovers. Plenty of blues songs have references to the deep south and the Mississippi Delta, although I can’t recall many about ‘Hollywood’. But, I suppose it shouldn’t be too surprising when the surname of the artist is ‘James’ and his first name is ‘Dean’...

After a single chord from John Timney’s guitar makes sure you’re awake, ‘Hollywood’ kicks off with an almost religious chant....Mr James repeating “Oh Lord, help me now” with a constant droning sound in the background. Timney’s guitar is used sparingly but very effectively, the drumbeat maintaining the tempo, as Dean develops the movie theme, with references to Fred and Ginger:

“Sometimes, Hollywood
Chew you up like a bad girl should.
Ginger Rogers and Fred Astaire
I feel like dancing, I’m walking on air.”

Just when Dean’s lyrics show signs of cheering up, he again implores the big man upstairs to help him, as “the world won’t know my name”. Maybe he’s come to terms with that by the end of the track, as “the world is a brighter place to me”. This is a cracking way to open the album - a song with a sound that is uniquely Dean James and the Black Dogs.

In the title track there are no such leanings towards any level of cheerfulness. Just what the ‘Truth’ is that can’t be believed is difficult to interpret, but whatever you might think, it sounds like a truth that might have been best left hidden. The masterful guitar work from Timney for the first minute and a half sets the dark tone and feel of the song, so you are almost prepared for the vocals that allude to secrets and cover-ups in a boy’s life, who gets called names and feels ‘paralysed deep inside’, until he finds the ‘truth’. As we get two-thirds of the way into the song, a single reference is made to finding ‘Black Dogs’, which I take to be a realization that he is depressed, perhaps at the realization of how he came into this world......
.......or has he just found his band?

The dark character of the songs continues throughout the album, and the quality quotient remains constantly high. I love the way blues artists sometimes use jaunty or upbeat rhythms and melodies to almost distract the listener from the sad depressing meaning of the lyrics. ‘Sleazy’ just about falls into this category, bouncing along and providing some toe-tapping relief to the more serious stuff.

The anti-war song ‘Another Way’, on the other hand, tells it like it is, with the sounds of thunder and a constant couple of notes emphasizing that the fight against terrorism will never end. Dean sings with such deep feeling of his hunger to find another way, his words really hitting home. His voice almost acts as a second instrument to accompany Timney’s amazing strings in this track, the background vocals especially biting into your soul. The cleverly put together lyrics combine with these distinctive sounds to create an outstanding song - possibly my favorite on the album.

“Young men reading their books of faith,
And justifying a way to hate.
Now, other men want to kill them too,
Eye for an eye is all we do.”

I say ‘possible’ because it’s difficult to choose - my ears can’t detect a weak track from the eleven on the album - but this is definitely in my top three.

Dean has completely changed the personnel in his band for this album. The multi-talented John Timney has taken over duties on lead guitar, bass, keyboards, and drums, and demonstrates that he is probably among the best guitarists in the north-east of England. For live performances, bass player Mick Humes has been drafted in, along with experienced drummer Trevor Brewis.

Dean James begged for help from his god in the superb opening track, ‘Hollywood’, because “the world won’t know my name”. Well, if there’s any justice in this world, never mind whether there’s a god to give him a helping hand, Dean deserves to achieve big success. It is to be hoped that the songs on ‘Truth’ get played over and over, and the world becomes very familiar with the name Dean James. The quality of both his songwriting and his voice, combined with his appetite for hard work, put him up there with the very best.