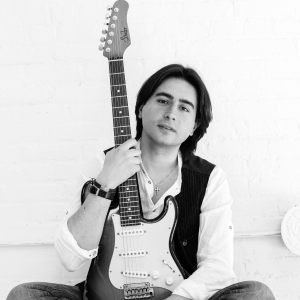 When you hear music from the heart it resonates on a different level. Davide Pannozzo has been described by critics as one of the most interesting artists of contemporary Blues guitar. His style is very much his own with splashes of Jeff Beck, Eric Clapton and Jimi Hendrix.

There are very few artists these days that can inspire and are filled with inspiration and great ideas, Davide Pannozzo is one of them. When you first hear his music you know there is something special going on… Will Lee (Late Show with David Letterman, The Brecker Brothers, 24th Street Band, …)

Having studied Classical Guitar since the age of six, Davide went on to graduate from the Conservatory of Santa Cecilia in Rome.
During his career he has performed at a number of clubs and festivals in Italy (Pistoia Blues, Ameno Blues, Blues in Town, Accadia Blues, …) and abroad (The Bitter End in NYC, Bass Player in Los Angeles, IBC in Memphis, Ronnie Scott’s in London, Fete de la Musique in Paris,International Jazz Fest in Bucharest, Taubertal Festival in Frankfurt, …) and has played alongside artists such as George Benson, Steve Jordan, Will Lee, David Garfield, Clifford Carter, Phil Palmer and Mark Mondesir to name just a few.

Davide won the Emergenza European Acoustic Festival as Acoustic Solo Guitarist in 2009, followed by the Groove Master Award for Best Italian Blues guitarist in 2010, and most recently the Highland Uproarcompetition where he received hundreds of votes from listeners of the station in Scotland.

He has collaborated with Maestro Pippo Caruso on the TV show "Domenica IN", with Oscar-winning Maestro Luis Bacalov on “Mediterranean Harbor" produced by Walt Disney and with the masters Franco Piersanti andNicola Piovani.
His album Born Electric was released by EmArcy/Universal Music featuring very special guests: Robben Ford, Carl Verheyen and David Garfield.

His latest album "A Portrait of Jimi Hendrix" features off the floor recordings - with no overdubs - of young Italian blues guitarist and singer Davide Pannozzo performing with Lello Somma on bass and younger brother, Simone Pannozzo on drums. The album was originally recorded on analog tape and digitally released on November 27, which would have been Hendrix’s 72nd birthday. It gets #1 on iTunes top100 Blues Album in Italy and iTunes top100 New Blues Release in USA.