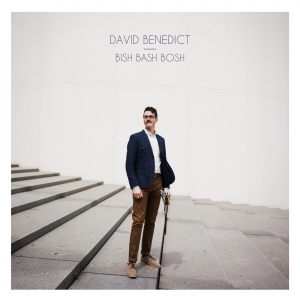 Mandolinist David Benedict’s sophomore full-length record The Golden Angle marks a coming of age. After graduating with a mandolin music performance degree and spending a 3-year stint in Nashville touring and recording with acclaimed bass player Missy Raines, David was looking for the next chapter in his musical career. So in 2017, he made the move to Boston to join the bluegrass band Mile Twelve. The group quickly gained notice after the release of their debut album Onwards, receiving the 2017 IBMA Band Momentum Award and touring extensively around the US, New Zealand, Australia, and Japan. David also claimed the 2018 IBMA Momentum Award for Instrumentalist of the Year. These opportunities have contributed to the development of David's own artistic voice as an instrumentalist and composer, which is showcased in this new solo record.

David’s compositions, arrangements and playing style on The Golden Angle demonstrate his ability to integrate seamlessly with the high-caliber company he keeps and confirms his place among notable emerging acoustic musicians. Jazz guitar sensation Julian Lage notes, “David is one of the most inspiring lights on the creative acoustic music scene today. A talented player and composer who is paving the way for new and exciting music! I can’t wait to see where he takes us!”

David now lives in Cambridge, MA, and continues to perform full-time with Mile Twelve. In between touring and recording, he teaches private mandolin lessons from home and at music workshops around the country. David is the creator and curator of the popular weekly video series Mandolin Mondays hosted by the Mandolin Cafe.
9
What's This
Advertisement