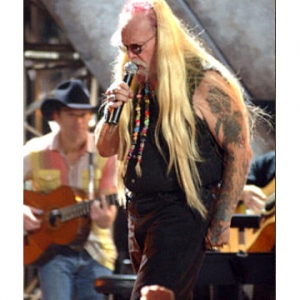 To download DAC's new single, "Single Father" and "59 Cadillac 57 Chevrolet", do it from DAC's new album, DAC's Back at this link:
DAC's Back.

This particular album was recorded live in 2001 at Biketoberfest '01 from the Iron Horse Saloon and released in 2002.

If there's ever been a way to describe DAC, it has got to be his ability to defy categorization. He has been his own man since he was a child. He was basically in several of Ohio's correctional institutions from the age of 9. By the time he emerged a fully formed adult who had taught himself guitar and left for the free world, DAC had a clear eye on what his future was to be.

He decided to take the country music world by storm. And though he had to claw, hype and charm his way up the ladder, his talent pulled him through. And his ability to feed the press juicy stories and tales of his misdeeds didn't hurt either. DAC has regaled writers with tales of his misadventures.With nearly three decades of following his musical muse wherever it's led, this outlaw has crossed the panorama of American roots music.

As well as being a singer, songwriter, guitarist, David is also a magician, deep sea treasure hunter and movie star. His movies include "Stagecoach", "The Last Days of Frank and Jessie James". "Lady Grey", "Buckstone County Prison" and "Take This Job and Shove It" to mention a few.

Around the time of his first album release (PENETENTIARY BLUES) in 1971, stories of his prison days and teaching a young Charles Manson to play guitar fed the flames and got his music and name out among the masses. He was a tireless self-promoter; something that still serves him well to this day.

Much has been written about David's past and his lifestyle but not much about his achievements over the years. From performing on FARM AID to touring with NEIL YOUNG, KID ROCK and WILLIE NELSON. David's song "Take This Job and Shove It" has received a Million Airplays Certificate from BMI.

His "Greatest Hits Album" is PLATINUM and his "First Ten Years Album" is GOLD. He has had sixty-three songs on the Billboard Singles Charts, including "Mona Lisa Lost Her Smile", "The Ride", "Please Come to Boston", "Willie, Waylon and Me", "Jack Daniels If You Please", "You Never Even Call Me By My Name" to name a few. He has written songs for Johnny Paycheck, Tanya Tucker, George Jones, Willie Nelson, Leon Russell, Charlie Louvin, Del Reeves, Tammy Wynette, Melba Montgomery, Stoney Edwards, The Oakridge Boys and KID ROCK. Both "Would You Lay With Me" and "Take This Job and Shove It" are million seller songs penned by David. Johnny Cash ahd recorded David's songs including "Would You Lay With Me" on his current chart topping album entitled "CASH". His tour schedule is never-ending list of SOLD OUT shows. He performs both Country and Rock shows depending on the venue. DAC also plays in many Casino's where he does Las Vegas type shows. DAVID IS AN ENTERTAINER.

DAC has been through a lot in his life. He had tried to put his past behind him and move on with his life. He is a single father with his oldest son Tyler traveling with him on the road, where he is home-schooled. His youngest son, Carson, and his two daughters Tanya and Shyanne, live with their mother. Carla, his oldest daughter, is married and the mother of his grandchildren. Shelly is a singer songwriter living in Austin, Texas. David's newest album is on Cleveland International Records. It is called "Songwriter of the Tear" and includes all songs written by David including "The Penny", "Drink Canada Dry", "The Ghost of Hank Williams", "Then I Found You", "Standing Too Close To The Flame", "The Only Thing Missing Is You", "Desperate Man" and others. David is also did an album with PANTERA and KID ROCK!

Kris Kristofferson, Billy Joe Shaver and Waylon Jennings were his friends and his peers; they immediately accepted and recognized his talent. There would be no turning back. When the humorous "You Never Even Call Me By My Name" (co-written with the late Steve Goodman) became a hit in 1975, DAC had become a major force in the music business. He also started becoming a great concert attraction. His shows were unpredictable and always featured new material. More songs like "Willie, Waylon And Me," and "Longhaired Redneck" worked their magic live and added to Coe's persona as " the outlaw's outlaw." Several more albums on Columbia followed and songs like "The Ride" (a Hank Williams ghost story) and the touching "Mona Lisa Lost Her Smile" showed DAC could weave a story like few others in country music.

In the early 80's DAC's personal life was spinning out of control, he filed for bankruptcy and found that all of his songwriting copyrights had been sold. All of his songs now belonged to someone else; he was back to square one. And as his albums sales started to falter, Coe found himself touring more and more to make ends meet. Although bitter about the loss of his songs, Coe wasn't a man to be stopped. He left Columbia Records in 1987 and continued to record and release his own material. He'd sell his CD's at concerts and on his website (oficialdavidallancoe.com) and continue to tour. Since that time, Coe has had other travails - when he lost his boat, his last wife and so on…

None of those things stopped his clock though. He's continued to write great songs. His 2001 album, SONGWRITER OF THE TEAR, on Cleveland International was his last studio effort. The songs are as poignant and as punchy as ever. "The Walls In This House Are Too Thin" and "The Penny" are possibly his best songs ever. His lyrics and the depth of his feelings are those a man who has lived life. Bent but not broken. Older and wiser. And still able to kick some **** when required. David Allan Coe is a complicated man. He says on WHOOPSY DAISY that you "… just can't outrun your past." He's not trying to anymore; he's just turning it into art like all great writers. Perhaps now, David can finally take his place alongside the great stars of Country music, many of whom he influenced. He has held his head up high in the face of indifference, disapproval, accusations and outright hostility, "......

Over the years people have gotten the impression that I am prejudiced. I'm not prejudiced. Sure, I have this thing about controversy. But I don't dislike anybody because of their color or sexual beliefs or whatever.....". Since writing "Jack Daniels, If You Please" in 1957, David has had a knack for penning some of country music's most memorable drinking songs, But contrary to popular belief, he has never been much of a drinking man. "I only started drinking whiskey a couple of years ago, when I was 58 years old," he explains. "I will take a couple of shots of whiskey when I am onstage at night. But that's the only time I drink." It's all part of his gift for encapsulating human experiences even beyond the many he's lived through in his own life.

"I've written songs about having babies, but I've never had one," he says. "I think as a songwriter you can tune into other people's emotions and whatever, and you can write about that experience."Through all this he has persevered and let his talent lead the way and break down the doors. He has successfully put his prison years behind him, without trying to cover them up, and he holds himself up as "living proof" that an ex-con can succeed. An important message for the many who are now in the position he was in then. With many years of hard living behind him, David is at the height of his creative powers, experimenting with new music, and we can look forward to many more years from this incredible showman.

David is a star in every sense of the word, and someone to look up to and learn from. The term "living legend" may be overused to the point of cliche, but in the case of David, it fits like a glove. Hailed by Country Music Magazine as "..one of the most singularly fascinating and enigmatic figures to carve a niche in '70s and '80s country music," Coe continues to cut his own bold and singular path through the world of popular music.

David is a man comfortable in all kinds of music provided that music has the unbridled passion of a man committed to life without limits. Still while it's hard to pin the man down in any one place, space or time the people who've been turning out for David's legendary live performances over the last decade have elevated him to cult hero status. Because of his ability to capture their emotions they have embraced David's music and used it as their own rallying cry against the status quo.

At a time when the touring industry is anemic, he continues to play some 200 dates a year. David is packing 'em in on college campuses, biker bars (Iron Horse Saloon), honky tonks, state fairs, blues bars and music halls. If there's a stage and people looking to let off some steam and have their feelings re-calibrated, David will be there. It's a covenant that keeps the "Long Haired Redneck" on the road.

His devotion to the fans, and the music, has created a spiral that now has its own momentum. At David's shows there's a chemical reaction that transforms the songs when the audience is in the house. For it's the people that set David on fire. When they start whooping and hollering, it feeds an already burning love of music and stokes the flames higher. You can hear the musicians straining to get every last drop of passion from their instruments. It's in the way the notes bend, the beats pound and David's gravelly voice just keeps coming at you like a train. In those moments, it's easy to remember why music mattered so. And in those moments, we can all be transformed. But it takes someone willing to push the envelope to make it happen. For David, pushing the envelope is the natural course and just a starting point.........