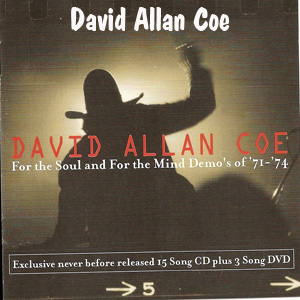 Steve Popovitch ,Jr and Rose Drake recently put together this CD of David Allan Coe's original demos as they were originally played for the recording giants in Country Music in the 70's.

Today, there are thousand of songwriters in Nashville. But when David Allan Coe came to Nashville in the 60's and 70's there were only a handful and if you even got a big artist to record one of your songs you didn't make a lot of money...you wrote country music for the love of songwriting and Country Music.

In 1974, Tanya Tucker scored a massive hit with David Allan Coe's song "Would You Lay With Me In a Field Of Stone". Soon followed his own recording contract with CBS Records where he would become a household name with "You Don't Even Call Me By My Name" and with self-penned "Long-Haired Redneck" and "Willie, Waylon and Me". In 1977, he wrote "Take This Job and Shove It".

Always outrageously colorful and outspoken, he became an enthusiastic participant in country-music's "Outlaw" movement selling millions of records. Today David's still on the road with a heavy schedule of show dates, writing songs and hiding the sensitive creative person he is underneath all his outlaw ways.

This Cleveland International project is dedicated to Pete Drake.