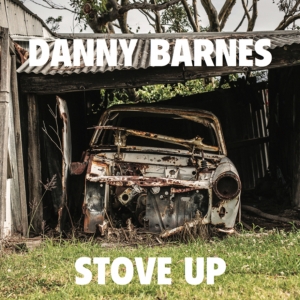 Danny Barnes Releases All Acoustic Homage to Don Stover, Stove Up, on March 3, 2017

ASHEVILLE, NC -- Danny Barnes is already known as an iconic American musician, a banjo playing innovator who’s earned high praise from everybody from Bill Frisell and Dave Matthews to Steve Martin, who presented Danny with the Prize for Excellence in Banjo in 2015. From the days with his groundbreaking Austin band, the Bad Livers, to his two decade solo career experimenting with electronic music, jazz, old time string band music and more, he’s a genre bending, rule breaking original who prefers to color outside the lines.
Now, with Stove Up, out March 3, 2017, he’s showing us that it was always a choice, that he’s always had the chops to play straight ahead bluegrass banjo with the best of them. With a top-flight band backing him up, Danny turns in an amazing set of tunes that demonstrate his respect for tradition and his commitment to his own musical voice.
“Happily, with Stove Up, our five-string hero steps out of the lab and into the sunlight where his pre-war Gibson can really shine,” says Tim O'Brien. “Producer and guitarist Nick Forster wisely loosens the reins and lets his pack of thoroughbreds set a fast pace around the bluegrass track. Mandolinist Chris Henry, with his bone-dry tone and expanded traditional approach, is a particularly inspired foil to Barnes. Along with Forster, much decorated fiddler Jason Carter, and everyone’s favorite bassist, Mike Bub, they cut through some beautiful territory, including two Don Stover’s compositions—”Black Diamond” and “Rockwood Deer Chase.” Three vocal tracks peek through the instrumentals and give new listeners a look into the quirky mind of Barnes… These are live and lively performances where you can almost hear the musicians smile.”
Recorded in eTown Studios in Colorado, Stove Up was produced by Nick Forster and engineered by James Tuttle. The mixing and editing were done by the great banjo player Scott Vestal and it was mastered by David Glasser at Airshow.

Danny Barnes. Photo by Monica Frissell
Danny says, “After 45 years of practicing, this is the first acoustic bluegrass record I've ever made. Nick, Mike, Jason, and Chris are bluegrass royalty! It was a sure enough honor to be able to make Stove Up, a loving homage to the great Don Stover.”
One of his banjo heroes, Don Stover, was the inspiration for this project simply because Don knew how to play bluegrass banjo in a way that fit the style, showed respect for Earl Scruggs and others, but it still sounded like him, had his own voice. Danny delivers on all fronts here, from scorching banjo fiddle duets with Jason Carter (“Paddy on the Turnpike,” “John Hardy,” and “Bill Cheatum”) to faithful versions of Scruggs (“Flint Hill Special” and “Fireball”), or a Grandpa Jones tune (“Eight More Miles To Louisville”) to a reinterpreted Rolling Stones song (“Factory Girl”) or his own originals (“Isotope 709,” “Charlie,” and “Get It While You Can”).