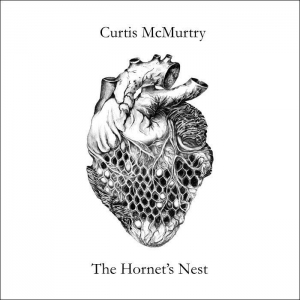 AUSTIN, Texas – For Austin singer-songwriter Curtis McMurtry, necessity wasn’t the mother of invention. It was, however, the mother of inspiration. Once he realized he could write songs for the instruments he and his friends already played together—banjo, cello, upright bass and muted trumpet—rather than hunting for players to fit songs, McMurtry found his musical niche. And when he dropped his banjo tuning to a less “bluegrassy,” more cello-complementary key, he knew he’d discovered the sound he’d been seeking.

By the second song on The Hornet’s Nest, releasing Feb. 24, 2017, it becomes obvious he’s mining a previously untapped musical vein. With his core chamber ensemble, he whips melodies and rhythms into a special nectar, then carries it to a hive filled with richly drawn characters in various stages of behavioral development. Somehow, he connects those lives together, like the chambers of that nest. Or a play staged in 13 elegant vignettes.

The album’s theatrical feel is enhanced by the intricate vocal pas de deux McMurtry often conducts with his main duet partner and cellist, Diana Burgess, of Austin orchestral-pop band Mother Falcon. You can almost visualize them tangoing—in a boxing ring—as they vocally spar on “Wrong Inflection.” With Nathan Calzada’s trumpet as referee, McMurtry volleys, in his bell-like tenor, I stay on my guard/‘cause every time we fight you push me too far/stop insisting that I take things too hard/you know I bruise just like a peach. Armed with her sweet soprano, Burgess fires back, Love this won’t do/don’t pretend to know the pain I’ve been through/when everything you have was handed to you/you never even had to reach. They jab an bfsd parry like fencing champs, sounding as charming as Teddy Thompson and Kelly Jones while delving into the murkier parts of relationships.

Likening his songs to snapshots that don’t reveal the full story, McMurtry says they’re sometimes designed to treat listeners as eavesdroppers. The couple above might be overheard arguing in a restaurant parking lot, or forcing a fellow elevator rider to ignore their back-and-forth barbs.

McMurtry also confesses that some of his narrators are villains who think they’re victims, though others are quite aware of their villainy. “I have a few characters that keep recurring, even though I don’t give any of them names,” he says. “There’s one that I like to inhabit that’s extremely selfish and Machiavellian. Sometimes it’s just fun to be a villain onstage.”

Whether that description fits the singers of “Together for Now” is debatable. But hiding behind the gentleness of this ukulele-guided duet are these lyrics: We let the sunset unravel around us/you hold me closer than I should allow/Just for a moment I want you forever/but we’re just together for now.

Inspired in part by jazz standards such as “You Always Hurt the One You Love,” the two-verse song is even more of an exercise in snapshot brevity. But its verbal economy nonetheless envelops a giant-sized issue: an unrepentant selfishness that’s becoming all too normal. McMurtry similarly addresses the hypocrisy of piety without compassion in “Coward.” In “Can’t Be Better,” he examines the selfishness of desire, though he also notes, “I guess it’s just fun to write songs about sex.”

The ghosts of Brecht and Weill—channeled through Tom Waits—hover over songs such as “Tracker,” which explores obsession in a deceptively singsong tone that makes it even creepier.

Yes, this album has dark shadows, all right—including characters who love to sting. But there’s also an air of playfulness in the arrangements of songs such as “Loves Me More,” a barbershop-ragtime mashup that practically demands a Vaudeville stage. You can almost hear the crackles of a shellac 78 spinning on a hand-cranked Victrola as a trio croons, Brother, don’t you get so sore/I never meant to start a war/It’s not my fault she loves me more than you.

That third voice belongs to Calzada, who harmonizes on several tracks, while Taylor Turner handles bass and Mike Meadows (Willie Nelson, Hayes Carll, John Fullbright) adds percussion. McMurtry, who produced, keeps arrangements taut and spare; besides his own guitar or ukulele, the only additional sounds are occasional pedal steel or bass clarinet notes.

Despite its non-conformist nature, The Hornet’s Nest is not some exercise in esoterica. But it’s not three-chords-and-an-attitude brashness, either. It is a thoughtfully rendered, gorgeously realized bittersweet symphony, a quite cohesive follow-up to his 2014 solo debut, Respectable Enemy. That album earned McMurtry praise in Rolling Stone and an appearance on the internationally syndicated radio show “Mountain Stage,” among other accolades.

“A lot of the music I listen to is from 1950 and earlier,” McMurtry says, adding, “I actually missed a lot of rock in my musical education.”

Apparently, that hasn’t hurt his development a bit. McMurtry, 26, the son of Americana artist James McMurtry, wrote his first song—a blues number about Godzilla and King Kong—at 4. He learned to play it on guitar at 11 or 12; by then, he’d already begun studying saxophone. By 13, he was playing in a band. After earning a degree in musical composition and ethnomusicology from Sarah Lawrence College in New York, McMurtry steered toward Nashville, where he spent a year trying to figure out whether he could co-write pop-country tunes and getting tutored by Guy Clark. Deciding the answer was “no,” he returned to Austin and began hunting for musical gold. And he’s shaped it into an array of jazz, chamber-pop and other sounds he prefers to leave unlabeled.

Regardless of what we call it, The Hornet’s Nest proves that critics like the New York writer who called McMurtry “a world-class talent” got the buzz exactly right.