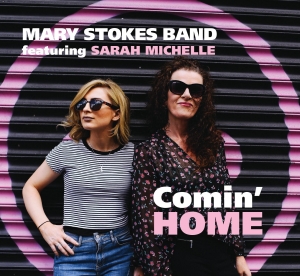 Irish vocalist extraordinaire Mary Stokes continues progress in musical collaboration with the sensational Irish guitarist Sarah Michelle and partner Brian Palm. In this new ‘as live’ album, ’Comin’ Home’, The Mary Stokes Band capture the energy, passion and power of their renowned Live Blues shows. The 13-track album truly showcases Mary Stokes’ vocals complimented throughout by brilliant musicianship generating an authentic blues sound, feel and atmosphere. In addition to Sarah Michelle on guitar, The Mary Stokes Band features sidemen Brian Palm on harmonica, with Chris Byrne on bass and Robbie Barrett on drums, and Dermot Stokes on Piano. Recorded in Dublin, the album was expertly mixed by renowned rock legend Pete Holidai (the Radiators from Space, Trouble Pilgrims) and mastered by Joe Chester. In a musical history spanning two decades The Mary Stokes Band has performed with BB King, Fats Domino, John Lee Hooker, Bo Diddley, Hubert Sumlin, Buddy Guy, Taj Mahal, Lowell Fulson, Johnny Copeland, Jeff Healey, Rory Gallagher, Carey Bell, Lurrie Bell, Pinetop Perkins, Georgie Fame, Louisiana Red, Lefty Dizz, John Campbell, U.P. Wilson, Eddie Kirkland and many other blues greats. Mary Stokes and her band have toured throughout Ireland, Europe, and the U.S.A, performing at numerous festivals and in many of the most iconic Blues Clubs in the World, with recent successes including a critically acclaimed show in Liverpool’s world renowned ‘Cavern Club’ - by invitation from Julia Baird, John Lennon’s sister and Director of the Cavern Club. Hot Press Magazine: Jackie Hayden: ‘Comin’ Home’ The Mary Stokes Band, review, 25th January 2021:
Blues in the time of Corona...‘A remarkable aspect of the pandemic is that there’s absolutely no let-up in the quality and inventiveness of Irish musicians. If there were ever any doubts that music is indeed a major part of what we are, they’ve been truly vanquished.
Somehow, this spiky set of haunting electric blues from The Mary Stokes Band makes a perfect soundtrack for these uncertain times, blending the bleakness of social isolation with the gritty determination to pull through together. There’s a gratifying live feel too from a recording – overseen by producer Pete Holidai – that also captures the subtlety in the playing and singing, with Stokes herself and harmonica-partner Brian Palm in dazzling form. The album opens with harmonica-driven stomper ‘Coming Home’ setting the agenda for what follows, with Stokes’ voice clear and arguably more expressive than ever. A major find is relative newcomer, guitarist Sarah Michelle, who can do sizzling and sumptuous as required. She sparkles on their first version of the trad ‘Mattie Won’t Write’ which features here in two different takes, the second a less furious version that lets more light in. Meanwhile, the band positively smoulders their way through Van Morrison’s ‘Roll With The Punches’.
Shobsy O’Brien, lead voice with State Lights, makes a fine foil for Stokes on the blues standard ‘Help Me’, which also has an almost demonic Sarah Michelle rattling through it. ‘Mola di Bari’ is a funkified headshaker, and they close with a Stokes/Palm original, ‘Long Way From Home’. The set is solidly underpinned by bassist Chris Byrne and drummer Robbie Barrett, with colourful piano additions from Dermot Stokes. It’s an album in which all human life gets a fair shake – from love and loss to loneliness, despair and homesickness... and all that travels in between.
• 8/10, out now.’
Hot Press Magazine: https://www.hotpress.com/music/the-mary-stokes-band-release-as-live-album-comin-home-22835086

'Comin’ Home’ has had widespread accolade and acknowledgement as an authentically ‘live’ Blues album, displaying the power, passion and blues feel that Mary Stokes and her band are renowned for.