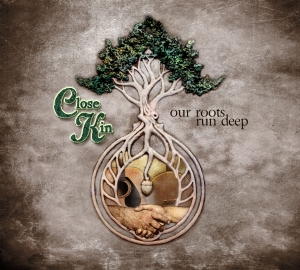 Mountain Roads Recordings announces the sequel to the popular and award winning Close Kin: A Reunion of Bluegrass & Old Time Music project. Close Kin: Our Roots Run Deep will again feature the blending of the bluegrass, old-time and American styles of music in one album. Featured artists range in ages from eleven to seventeen years of age who can hold their own with the very best musicians and vocalists today.

Close Kin: Our Roots Run Deep was produced by award winning songwriter/singer Johnny Williams, and will feature superb arrangements and vocal and instrumental combinations of 12 carefully selected familiar and not-so-familiar songs performed by the very best young entertainers from the Blue Ridge and Appalachian Highlands regions.


Recording and video production began on October 19th, 2013. The official release date for Close Kin: Our Roots Run Deep has been set for Friday April 11, 2014 and will be performed by the project’s artists at the 2014 Blue Ridge Acoustic Uprising in Wytheville, Virginia.

Karl Cooler of Mountain Roads Recordings says, “As soon as the original Close Kin project was completed, I knew that we had created something very special. Johnny Williams and I immediately started planning this album. Most all of the artists from the original recording are teachers and we looked first to their students. As with the artists from the Close Kin project, where better to showcase the youth artists who will carry the sounds of our region forward? We quickly found all of the talent needed for the perfect combination to create this recording. Following in the model of the original project, it was especially important to us to pick songs that were both familiar and not overly recorded then team up the artists into combinations that are unlike anything out there today”.
Johnny Williams adds, ”This follow-up youth project to Close Kin is something Karl and I have wanted to do for a while. The performers we have recruited to play are representative of the great musical talent from Southwest Virginia and North Carolina, regardless of their young ages. These players have collectively played this region’s music for most of their lives at a very high level of musicianship. Most of them will be playing together for the first time as well as embarking on tunes and styles of music they have not been accustomed to. But I'm sure as you will hear they will pull it off with flying colors. It's an honor and privilege to be asked to produce and arrange this project with Mountain Roads Recordings, Wesley Easter and these fine young adults!”

The original Close Kin project was the #3 choice for the Roots Music Report’s Top 100 Bluegrass Albums of 2012 and we have no doubt that this one will be equally popular with radio personalities and their listeners. Roots Music Report is the number one independent music chart in the world. They compile radio airplay data from radio stations around the globe that play all forms of roots music, so that each week you can see which independent artists are being played the most and by what stations are playing them. Unlike some charts out there the RMR charts are not subjected to radio promoter, special interest groups or record label input. Stations reporting their play list is the only way for artists to appear on the RMR charts.