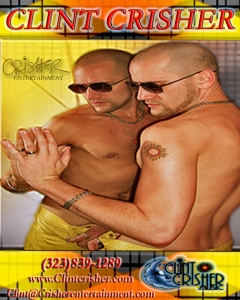 With many of his remixes and music videos in heavy rotation, Clint Crisher and his catalog of over 100 songs, provides popular material for the likes of XM Satellite Radio, ABC Radio Networks and nightclubs across the country. Clint is a prolific recording artist with 8 plus albums released, most notably, Perfect World' and Terrific Distraction'. Clint's mantra is "Music Is The Reason", with a Pop/Electronica /Dance sensibility and strongly believes in the integrity of his compositions. He has been recognized as a Billboard Breakout Artist' in 2007 for the hit single Spotlight, The Remixes', with his work in demand on both sides of the Atlantic.

The Florida native is a multi-faceted artist who plays the guitar and trombone, as well as sings, writes, produces, acts, dances, models and emcees. Clint is musically influenced by the works of Elton John, George Michael and Michael Jackson. Clint's youthful and seductive stage presence has likened him to Elvis Presley, however with a broad audience appeal. Vocally, he has been compared to George Michael, David Bowie and David Byrne of the Talking Heads. Clint's musical compositions are soulful, with an energetic beat and well crafted lyrics.

Although starting in the south, Clint has moved throughout the country in pursuit of his passion, performing in such celebrated venues as Crobar in South Beach, Webster Hall in New York, as well as numerous festivals and concerts across the United States. Clint also has the distinction of singing for Her Majesty, as part of his high school music group.

As his portfolio of performance and compositions grew, Clint formed an independent label, Crisher Entertainment', and has recently licensed his work for use on motion pictures, television, radio and the internet.

Clint resides in Los Angeles, California where he continues to hone his craft, awaiting you to book his premiere world tour.