CJ THE DJ AND KENTUCKY RAIN . 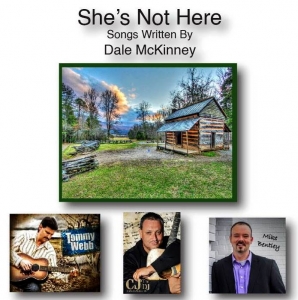 After the global success of “Bluegrass Rulz” and “Angels Calling at my Door” and other songs from CJ the DJ’s 2012 breakout CD “Old Friends and New Memories”, CJ has been back in the studio again and his long awaited Follow up SINGLE is Poised to Surprise, Impress, and inspire. The new single "shes not here" is ready to go ,along with 14 other songs from the cd SHES NOT HERE- SONGS WRITTEN BY DALE MCKINNEY 4 songs written by cj the dj
Dale MCKINNEY (BMI) who wrote "shes not here" has brought forth a new original song that CJ Delivers with Power and conviction.if your family has been touched by dementia and alzheimers disease, take a moment and listen to this song we hope that this song will touch your heart and bring you comfort.


CJ THE DJ & Kentucky Rain releases their new cd single "shes not here" and what a release this is. This has got to be some of the best bluegrass/bluegrass gospel that has come out of the great state of Kentucky in quite some time.CJ THE DJ has a voice that is heartfelt and his vocal performance definitely informs the listener that this man knows his music and is not afraid to sing it to the world. CJ's voice is deep and rich in tone , The production is first-rate .It just doesn't get any better than this for any bluegrass fan and radio will be spinning this CD for their listeners till the cows come home.""" Reviewed By: Robert Bartosh"""cashbox charts.

There is a lot of phenomenal talent coming out of Eastern Kentucky. This area has given the world of country music such talents as Patty Loveless, Dwight Yoakam, Loretta Lynn, Crystal Gayle and Billy Ray Cyrus. One of our local talents whose star is on the rise is CJ the DJ. CJ as he is most commonly known is actually named Carl Jarrell Jr. He was born in a community known as Slick Rock near Prestonsburg in Floyd County Kentucky, a beautiful area nestled with in the Appalachian Mountains. He cut his teeth listening to Conway Twitty and George Jones; He was also influenced by a couple Eastern Kentucky Natives; Keith Whitley ; Ricky Scaggs. CJ has been a radio DJ for well over 25 years.
Having been with melvin goins for 30 plus years co-hosting MELVIN GOINS BIG SANDY BLUEGRASS TIME,and doing some road dates as well with melvin,cj carries on the tradition saturday mornings 10am-11am on wmdj radio fm 100 and online wmdjfm.com after melvins passing just a few years ago.

All in all These two ole boys, from Floyd County Kentucky, both of which are radio DJ’s make a pretty good writing / singing combination.

DR RALPH STANLEY
"IVE KNOWN CJ THE DJ FOR ABOUT 25+ YEARS,A GOOD FRIEND AND A GOOD OL COUNTRY BOY.IF YOU LIKE BLUEGRASS AND COUNTRY MUSIC,YOU HAVE TO ADD THIS ONE TO YOUR COLLECTION, IT IS TRADITIONAL.I WOULD RECOMMEND YOU TAKE A LISTEN As well

CHARLIE LOUVIN OF THE LOUVIN BROTHERS
"I HAD THE PLEASURE OF SINGING A SONG WITH CJ THE DJ ON HIS CD,CJ IS A GREAT SINGER,PICK UP YOUR COPY AND LISTEN.

MELVIN GOINS
THIS MAN HAS A MOST UNIQUE VOICE,IF YOU WANNA HEAR THE MAN WITH THE GOLDEN VOICE OF BLUEGRASS MUSIC THEN HERE IT IS"

ANNETTE GRADY, WWW.1080WNCT.COM GOLDSBORO,NORTH CAROLINA
"CJS VOICE SPEAKS FOR ITSELF AS HE DELIVERS ANOTHER SET OF SUPERB VOCALS,GREAT SONG,AND ALL THE HEART AND ENTHUSIASM AS ONE OF THE BEST MALE VOCALISTS IN ALL OF MUSIC TODAY!!!THERES NO DOUBT ABOUT IT...


Bob Mitchell, DJ (Host of “Best of Bluegrass”)
Two Time Nominee for “Bluegrass DJ of the Year" (SPBGMA 2017 & 2018)louisville,kentucky
“CJ the DJ” (Carl Jarrell, Jr) has a new single, “She’s Not Here”. It’s an affecting song that addresses the heart breaking issue of Alzhiemer’s. A beautiful melody is complimented by poignant lyrics and CJ’s vocal is a perfect match for a powerful song.

She’s Not Here drops for CJ the DJ
Posted on December 3, 2018 by John Lawless

Carl Jarrell, Jr., also known as CJ the DJ, has released a single with his band, Kentucky Rain.

It’s a song that will tear at the hearts of anyone who has dealt with a loved one experiencing the debilitating effects of dementia or Alzheimer’s disease. She’s Not Here, written by Dale McKinney, tells of a son who visits his mom every day, only to discover anew that she doesn’t remember who he is, and the painful reality of her being unable to receive the affection of a child that loves her dearly.

Carl’s nickname comes from his on-air work on WMDJ radio in Martin, KY. They host his weekly Melvin Goins Bluegrass Show, named to honor Melvin and his rich legacy in bluegrass music.

She’s Not There is available wherever you stream or download music online, and to radio programmers via AirPlay Direct.

About the Author
John Lawless/BLUEGRASS TODAY

John had served as primary author and editor for The Bluegrass Blog from its launch in 2006 until being folded into Bluegrass Today in September of 2011. He continues in that capacity here, managing a strong team of columnists and correspondents.