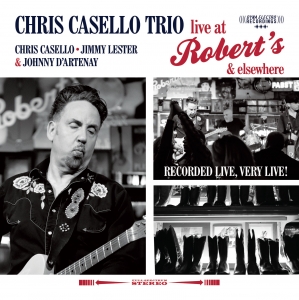 In 2013 The Chris Casello Trio featuring Jimmy Lester and Johnny G. d’Artenay were in their ninth year of working the world famous honky tonk, Roberts Western World in Nashville TN. Scott McEwen from the Fry Pharmacy had the crazy idea of recording and documenting the band using his 1957 Ampex 3 track half inch tape machine. This was done by loading the gear into a 1979 half-ton Chevy pick-up truck and parking it outside on the street and running only three microphones to the stage. This had to be set up in less than 30 minutes in the midst of traffic, tourists, musicians, drunks, cops and transients that flood lower broadway all day and night. It was an ambitious undertaking to say the least.

The result was a tough, honest, raw live performance of one of the most influential bands in Music City, featuring Nashville Scene 2012 Honky Tonk Hero and 2017 Ameripolitan Musician of The Year, Chris Casello. The high-energy 13 song set captures the aggressive, good natured urgency of a band on the strip in the days of serious competition, where if you weren’t killing it, the guys next door were pouring lighter fluid on the piano and setting it on fire to steal your crowd. It was survival of the fittest, and this recording shows just how fit the CC3 were in their prime and still are to this day.

As a bonus, four tracks are included from early recordings with Mark W. Winchester (Brian Setzer, Planet Rockers) and Mark Horn (Derailers) the original CC3 in the studio and at Nashville Public Library.

A rough rocking and rolling roots ride in the city that Willie said “was the hardest.” Play it loud, no ear buds allowed.

NOTE: For 2 ADDITIONAL songs ("Suzi Q" and "Hot Rod Lincoln") that we left off the upload just due to length (7-9 minutes each), contact our promo guy: rileypromo@gmail.com

Updated Chris Casello Bio:
Guitarist Chris Casello is one the most dynamic and entertaining guitarist in the world of roots music today. Casello takes his influences from Les Paul and Chet Atkins to Chuck Berry and Link Wray, multitasking guitar, steel and vocals in a high energy swinging rockabilly blues explosion. Originally from the Detroit area, Chris has worked with dozens of artists and toured the world, specializing in roots styles from swing, rockabilly, rhythm and blues, and country.

Chris Casello has been honored as 2017 Musician of The Year in Austin’s Ameripolitan awards winning the coveted Ralph Mooney award. He was voted # 1 Honky-Tonk Hero 2011 by the Best Of Nashville Scene and has been listed among the Top 10 Best Dressed in Nashville by MyFashionMaven.com! Back in the Detroit days, Casello had been honored by Detroit Metro Times polls in the jazz, country and rock categories. Chris is a second generation member of The Rockabilly Hall of Fame.

Chris Casello has enjoyed long working relationships with Sun, Fortune and Motown Artist Johnny Powers and many other pioneers including Jack Scott, Billy Lee Riley and Bo Diddley to name only a few. Any Chris Casello show always features mind boggling guitar and stage tricks so embedded in American roots you can smell the greens and taste the hot sauce.

‘If you've ever had your mind blown by a guitarist who looks a little like Silvio from The Sopranos, then you know the guy. Whether he's fronting his trio or working as a sideman (most notably, with the fabulous Brazilbilly), he stands out more for what he doesn't play: while a lot of other axmen try to wow you with their gazillion-notes-a-second chicken-pickin' virtuosity, Casello is a paragon of taste, emphasizing melody, groove and a healthy dose of musical humor, as he combines vintage country, slap-back rockabilly, blues and jazz. And he's a badass steel player to boot.’ - Jack Silverman, Nashville Scene

A recent review of Chris’ latest album:
‘A kick **** ride with one of America's wildest guitar players. 'The Nashville Years' is a compilation full of Chris's original songs and dynamite guitar playing. Recorded using tubes and tape and no digital monkey business.’ - Rockabillyworldwide.com