Block out the Sirens in this Lonely World 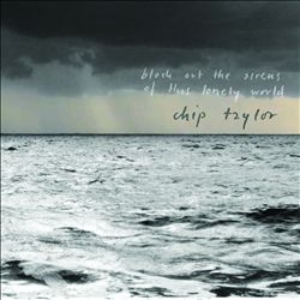 BLOCK OUT THE SIRENS OF THIS LONELY WORLD

Chip Taylor follows his string of critically acclaimed albums with 'Block Out The Sirens of This Lonely World,' an astonishing album of moody, sometimes foreboding, songs that find dark clouds everywhere but a few silver linings as well.
After making records for more than 50 years, this album is truly different for Taylor than all of his earlier ones. The songs were born out of a somewhat dark and difficult period for Taylor and are the most somber and serious of his long illustrious career. And for the first time since he was a teenager, Taylor allowed someone else - Goran Grini - to guide the project.

One listen to 'Block Out the Sirens' and you will hear and feel the thread that joins the entire album - the struggle and stress that people endure in their confusing lives and relationships. These songs find Taylor reflecting on his own problems and those of the people he knows - many through his travels all over the world playing music. Despite the often-bleak subject matter, there is a strong undercurrent of hope that runs through the album as Taylor finds solace in the simple and basic connections between people.

The lead producer of 'Block Out The Sirens,' Goran Grini, is largely responsible for the remarkable passionate feeling of the album. Grini, a keyboard player from Norway, had previously joined Chip's band, The New Ukrainians (who are actually mostly Swedish), on Taylor's last album, 'F**k All The Perfect People.' Following that project, Grini produced an album for Norway's top folk singer, Paal Flaata, which was a collection of Taylor compositions (both old and new). 'Wait By The Fire' was released to critical and popular acclaim last year, hitting the top 10 in Norway and receiving a Norwegian Grammy nomination.

When Grini heard the guitar-voice demos of Chip's new songs at the Flow Festival in Helsinki in August of 2012, with Taylor's blessings, he enthusiastically began shaping the mood and direction of the album. He and Taylor wanted to keep the spare and direct feeling of the demo versions and Grini was able to incorporate both orchestration (for the first time on a Taylor album since Gasoline in 1971) and the New Ukrainians without sacrificing the raw power at the heart of the songs and Taylor's gritty vocals.

The New York Times says it best about Chip Taylor. "If you only know him as the as the guy who wrote "Wild Thing" and "Angel of the Morning" you don't know him! Chip Taylor is making some of the most distinctive acoustic music around today." Americana star performer/producer Buddy Miller last year said "Chip Taylor could've rested on his laurels years ago and still been way ahead of everybody else today. Lucky for us he didn't and he's making some of the most relevant music out there." With 'Block Out The Sirens Of This Lonely World' Taylor raises the bar again and his amazing comeback streak remains unbroken.

Bonus Recording
A brief tour with The New Ukrainians days before the making of 'Block Out The Sirens' found Chip in the mood to knock out several new fun band songs. Loosely recorded on the final day of the tracking sessions, they are included on a special bonus disc with the album titled 'Is That The Final Take?'