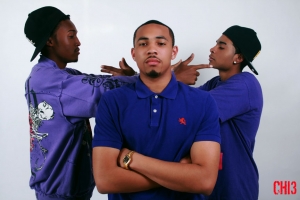 CHI3 is a Hip-Hop/Rap group that formed in 2008, when artists “youngnicca_cal,” “Definite,” and “Mike on tha Track” came together and began to mix their ideas of music. CHI3 has dropped 3 mixtapes: "No discussion," "Get Over it," and "Sex, Symbols & Soundz." CHI3 has collabed with many local artists, and has performed at talent shows, local parties, and open Mic Nights. After working hard for 2 years the group was discovered and well liked by "King Edward Music” in L.A. who signed them to the Label. CHI3 is currently in production with their first album "A New Me." The name CHI3 was given by the label because CHI3 are three young boys from Chicago; trying to make their dream come true.

Their debut Single release “Twerk it” was written by CHI3 Founder/Leader youngnicca_cal in collaboration with the two featured artists “Fabio” and “JayLove.” youngnicca_cal also produced it. “Twerk It” is a hot, captivating Hip-Hop Track mixed by L.A. Producer “Dice,” and mastered by award winning engineer Tom Baker at Precision Mastering in Hollywood, CA.

"Twerk It" currently is getting a lot of action from the Club DJ Community. A recent poll conducted by Starfleetmusic showed that of the nearly 3000 DJ’s that cast their vote so far, more than 60% said "This Song is a Hit." The release date is August 14th. 2012, when "Twerk It" will be available on iTunes and other major download sites.


About featured Artist Fabio:
Freestyle rapping has always come natural to Fabio, who is a featured Artist on "Twerk It." Fabio was born in Harvey, IL, where he was encouraged by his entire family who recognized his talent at a very early age. He often performed at family gatherings and re-unions. Fabio joined his first rap group D.C.U.B. in 2009. After departing from the group he has been working on building his solo career, and was signed to the King Edward Music Label at the end of 2011. "Twerk It" is his first release, and it is a sure thing that we will be hearing a lot more from this talented young Man.


About featured Artist JayLove:
JayLove, the second featured Artist on this track, started singing in her local church choir at age four. She has such love for music that she's been singing ever since, and that's what she is passionate about. Greatly supported by her Mom she has performed at various talent shows at school, as well as at the Harold Washington Culture Center, in Chicago. She has been writing and recording with her friend youngnicca_cal since several years. "Twerk It" is the first "commercially released" Track that she performed on, as she continues her journey of making it to the Top.