Chely Wright - Lifted Off The Ground 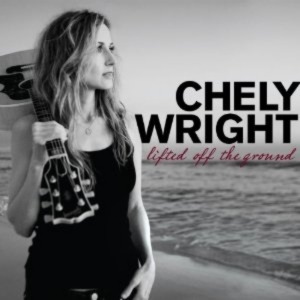 Lifted off the Ground may be Chely Wright’s seventh album, but on a number of levels it feels and sounds like her first, revealing an artist who has undergone a dramatic artistic transformation, emerging as a singer/songwriter of the first order. But the new album would never have come to be were it not for an equally dramatic personal transformation, which she has candidly and painstakingly documented. Lifted Off the Ground was released on Vanguard Records May 4, the same day Random House published Wright’s autobiography, Like Me.

Though she made her name as a commercial country singer, recording songs from some of Nashville’s top writers — including modern-day classics like "Single White Female," "Shut Up and Drive” and “Jezebel” —Wright had been honing her craft as a songwriter since her teenage years in rural Kansas. She was signed as a writer in 1993 and wrote half of her first and second albums before realizing she still had a ways to go before she was ready to bang ’em out with the big boys. But she kept working at her craft, placing a handful of original songs on each of her subsequent records, and coming up with a Top 10 hit for Clay Walker before penning eight songs on her most recent album, 2005’s Metropolitan Hotel, including the zeitgeist-capturing hit “The Bumper of My S.U.V.” That release followed on the heels of the rarities collection Everything, containing previously unreleased originals.

Though Wright views Everything as a heartening if relatively unsophisticated stab at finding her voice, she now regards Metropolitan Hotel as “a half-assed attempt to step forward as an artist. I chickened out and went back to my old golf swing,” she says with a rueful laugh. Despite her reservations, those two LPs earned Wright widespread critical acclaim — but nothing in her ample body of work hints at the extraordinarily personal and powerful material she pulled out of her innermost being for the new record.

While it’s fair to say that Lifted Off the Ground was five years in the making, the process began with an unmaking—a breakup leading to what she describes as a breakdown on the way to her ultimate breakthrough. The resulting songs required an acutely sensitive producer to blossom into life, and Wright considers herself extremely fortunate to have had Rodney Crowell come into her life at the critical moment. It’s little wonder she calls him “Shep,” short for “Song Shepherd” (in turn, he calls her Richell, her given name, just as a big brother might), because he was with her every step of the way during the course of those five years, prodding her, encouraging her, pulling her back from the edge of the abyss more than once.

The result is a remarkable song cycle of a woman climbing inch by inch out of a deep hole into the sunlight, from the one-two gut punch of the opening tandem of “Broken” and “Heavenly Days,” the latter co-written with Crowell, through the rocking, wicked-clever black comedy “Notes to the Coroner” the crystalline dreamscape “Snow Globe” and the revelatory “Like Me,” to the closing “Shadows of Doubt,” which could serve as Wright’s credo. “Those songs and my bicycle saved my life,” she says, without a trace of hyperbole.

The story begins in the winter of 2006, with a heartbroken Chely self-exiled to her bedroom, living in her pajamas, songs flooding out of her. “I didn’t have any choice,” she says. “It was no longer about decision making,” she recalls. “So I can’t really take credit for ‘taking that bold step’ and writing a whole record. Cognitively speaking, I didn’t have all that much to do with it. These songs were annoying me, every single day — I had to let them out. They felt different as they came out. There was no formula; there was no Nashville Music Row template. Quite frankly, I just wanted to sleep.”

Seized by emotions she neither understood nor had any control over, Chely obsessively strummed her treasured Gibson guitar till her fingers were as raw as her psyche. “I didn’t really play guitar until my breakdown,” she explains, “but it was a cold winter, and I couldn’t stand to be downstairs where my piano is, so I just stayed in bed with my J200 and literally played till my fingers bled. I put Super-Glue on the ends every morning and kept sticking fake nails on my fingers so I could keep strumming—just really primal.”

By the end of February 2006, Chely had managed to shape this emotional torrent into a batch of songs, which by then were no longer annoying her but intriguing her. At this “Now what?” moment, she immediately thought of Crowell, who was one of her musical heroes. She barely knew him, but she’d somehow captured his number in her cell phone, so she called him cold and asked if she could come see him. Minutes later, she was standing on Rodney’s porch, guitar in hand, heart beating out of her chest. He welcomed her in and led her up to his studio, whereupon she played him some of the new songs, including “Wish Me Away,” “Hang Out in Your Heart” and “Object of Your Rejection,” tears streaming down her perfect cheekbones all the while. They talked about the songs, and how different they were from anything she’d done before, and they talked about the raw state she was in. To Chely’s great relief, Rodney then offered his musical and personal support.

Though their bond was forged that day, Chely was a long way from acting on it. He emailed her, told her he couldn’t stop thinking about the songs and asked if she had them on tape. She replied that she’d laid down the songs on her hard-disc recorder as she wrote them. “He said, ‘Bring them to me — let’s get together,’” Chely remembers. “And I wrote back, ‘I don’t want to get together.’ Embarrassment had set in that I had called Rodney Crowell in such a state. He said, ‘All right. Then drop the songs in my mailbox.’ So I did, and a month later he sent me another email that just read, ‘Songs, please.’”

Thus began a rather unconventional mentoring process during which Chely would drop off her home recordings in Rodney’s mailbox, and he’d email his comments on the material, prompting the next round of recordings to be made and left at the designated drop point. As she describes it, “I’d wait till he’d email me, and I’d say, ‘OK, I’ve got four more.’ It was like he was my sensei: ‘Richell, songs, please.’” This email dialogue went on for nine months, until she was finally ready for a face-to-face conversation.

When they got together, Rodney told Chely over dinner that he was emotionally invested in the material she’d been working on. “You need to let me make a record with you.” To which Chely replied, “Record? That never even crossed my mind.” He then said, “Richell, this is your next record, and I need to produce it.” “But I’m not ready to make a record. These songs are still coming at me.” “That’s fine. Just call me when you’re ready.” “I will.”

Eventually, Chely was ready, and she made the call, by then with “That Train” and “Notes to the Coroner” in hand, the latter at Rodney’s instigation. They tracked six songs, with Rodney’s go-to guys forming the studio band lineup. Hitting the road for some tour dates, she kept writing, knocking off “Snow Globe,” among others. Near the end of this elongated project, Chely called Rodney and asked him to come over. When he arrived, they had an extended heart-to-heart talk during which she told him about a song she’d been sitting on since the first month of her breakdown. Fittingly, rather than playing it for him, she emailed an MP3 of the song to him soon after he left her house. She then opened a new document on her laptop, typed the words “Like Me” and started writing her book. That evening, she enjoyed her first good night’s sleep in three years…

There’s quite a bit more to this story, and it is told in full with this record and her new book.