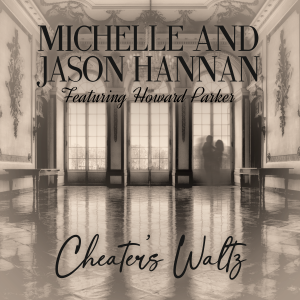 Michelle & Jason Hannan, a WAMMIE-nominated duo based out of Frederick, MD, is one of Maryland’s top up and coming independent country acts. The duo features Michelle’s one-of-a-kind voice, smooth vocal harmonies, and heartfelt songwriting.

Cheater’s Waltz is a concept album, primarily written by Jason and Michelle Hannan. Howard Parker, who is featured on this album, contributed a beautiful instrumental and was invaluable in helping to arrange these songs. The album tells the story of a woman who’s had bad luck with love. She decides to take one more chance when she meets a stranger in a bar. The album chronicles her new relationship going from good to bad and then to the absolute worst. A nasty break up followed by a murder and its aftermath.

"Smartly capturing that old time country radio feel, this duo shows a lot more Texas in their music than a duo from Maryland should. A real gem of a set for anyone that wants a taste of some real country, there’s a lot of wonderful stuff going on here." - Midwest Record

“Michelle and Jason Hannan serve up a feel-good high point moment here in their concept album that takes various intriguing twists and turns. Enjoy the whole concept, but this one [Nothing Left to Lose] also stands on its own merits, with a country rock relatability and handwringing, honky tonk croons.” - Melissa Clarke, Americana Highways

“‘Tennessee’ is a dolorous waltz that’s the perfect soundtrack for picking up the pieces. Michelle’s impassioned performance is a fine bit of character acting as our protagonist gathers steam to come to a decision she can’t take back.” - Rachel Cholst, Adobe & Teardrops
3
What's This
Advertisement