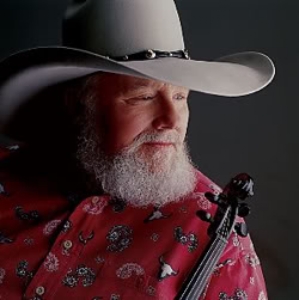 “Few individuals have symbolized the South in popular culture as directly and indelibly as Charlie Daniels.”
Encyclopedia of Southern Culture

Charlie Daniels is partly Western and partly Southern. His signature “bullrider” hat and belt buckle, his lifestyle on the Twin Pines Ranch (a boyhood dream come true), his love of horses, cowboy lore and the heroes of championship rodeo, Western movies, and Louis L'Amour novels, identify him as a Westerner. The son of a lumberjack and a Southerner by birth, his music - rock, country, bluegrass, blues, gospel - is quintessentially Southern. In fact, even his bent for all things Western is Southern, because his attire, his lifestyle and his interests are historically emblematic of Southern working class solidarity with the “lone cowboy” individualism of the American West. It hasn't been so much a style of music, but more the values consistently reflected in several styles that has connected Charlie Daniels with millions of fans. For decades, he has steadfastly refused to label his music as anything other than “CDB music,” music that is now sung around the fire at 4-H Club and scout camps, helped elect an American President, and been popularized on a variety of radio formats.

Like so many great American success stories, The Charlie Daniels saga begins in rural obscurity. Born in 1936 in Wilmington, North Carolina, he was raised on a musical diet that included Pentecostal gospel, local bluegrass bands, and the rhythm & blues and country music emanating respectively from Nashville's 50,000-watt megabroadcasters WLAC and WSM.

He graduated from high school in 1955 and soon enlisted in the rock .n' roll revolution ignited by Mississippian Elvis Aaron Presley. Already skilled on guitar, fiddle and mandolin, Daniels formed a rock .n' roll band and hit the road.

While enroute to California in 1959 the group paused in Texas to record “Jaguar,” an instrumental produced by the Bob Johnston, which was picked up for national distribution by Epic. It was also the beginning for a long association with Johnston. The two wrote “It Hurts Me,” which became the B side of a 1964 Presley hit. In 1969, at the urging of Johnston, Daniels moved to middle Tennessee to find work as a session guitarist in Nashville.

Among his more notable sessions were the Bob Dylan albums of 1969-70 Nashville Skyline, New Morning, and Self Portrait. Daniels produced the Youngbloods albums of 1969-70 Elephant Mountain and Ride the Wind, toured Europe with Leonard Cohen and performed on records with artists as different as Al Kooper and Marty Robbins.

Daniels broke through as a record maker, himself, with 1973's Honey In the Rock and its hit hippie song “Uneasy Rider.” His rebel anthems “Long Haired Country Boy” and “The South's Gonna Do It” propelled his 1975 collection Fire On the Mountain to Double Platinum status.

Following stints with Capitol and Kama Sutra, Epic Records signed him to its rock roster in New York in 1976. The contract, reportedly worth $3 million, was the largest ever given to a Nashville act up to that time. In the summer of 1979 Daniels rewarded the company's faith by delivering “The Devil Went Down to Georgia,” which became a Platinum single, topped both country and pop charts, won a Grammy Award, became an international phenomenon, earned three Country Music Association trophies, became a cornerstone of the Urban Cowboy movie soundtrack and propelled Daniel's Million Mile Reflections album to Triple Platinum sales levels.

The album's title was a reference to a milestone in The Charlie Daniels Band's legendary coast to coast tours. Including two drummers, twin guitars, and a flamenco dancer, the CDB often toured more than 250 days a year and by this time had logged more than a million miles on the road. On the Million Mile Reflections Tour, transported in a convoy of busses and gleaming black tractor-trailer rigs - a show that stopped traffic all over the country - the band now included a full horn section, back-up singers, a troupe of clog dancers and sometimes a gospel choir. By 1981, the Charlie Daniels Band had twice been voted the Academy of Country Music's Touring Band of the Year.

“I used to say, .I'm not an outlaw; I'm an outcast,'” says the Grammy Award winning star. “When it gets right down to the nitty gritty, I've just tried to be who I am. I've never followed trends or fads. I couldn't even if I tried. I can't be them; I can't be anybody but me.”

When you hear a classic Charlie Daniels Band performance like “The Devil Went Down to Georgia,” you hear music that knows no clear genre. Is it a folk tale? A southern boogie? A country fiddle tune? An electric rock anthem? The answer is, “yes” to all of that and more. And the same goes for “In America,” “Uneasy Rider,” “The South's Gonna Do It,” “Long Haired Country Boy,” “Still in Saigon,” “The Legend of Wooley Swamp,” and the rest of a catalog that spans 50 years of record making and represents more than 20 million in sales.

His resume includes recording sessions with artists as diverse as Bob Dylan, Flatt & Scruggs, Pete Seeger, Mark O'Connor, Leonard Cohen and Ringo Starr. His songs have been recorded by Elvis Presley and Tammy Wynette. This touring legend has been documented by ABC Newsmagazine 20/20.

In April 1998, top stars and two former Presidents paid tribute to Daniels when he was named the recipient of the Pioneer Award at the Academy of Country Music's annual nationally televised ceremonies.

“In his time he's played everything from rock to jazz, folk to western swing, and honkytonk to award-winning gospel”, former President Jimmy Carter said. “In Charlie's own words, .Let there be harmony, let there be fun and 12 notes of music to make us all one.'.”

“Charlie's love of music is only surpassed by his love of people, especially the American people,” former President Gerald Ford said. “He's traveled this land from coast to coast singing about the things that concern the American people. The Academy of Country Music's Pioneer Award is presented to a supremely talented compassionate and proud American, and a fair to middlin' golfer, too!”

On Saturday night, January 19th, 2008, Charlie's life long dream became a reality. He was inducted as a full-fledged member into the Grand Ole Opry. “It is an honor that I can't begin to articulate, there is no way I can express what it means to me”, says Daniels. “And to make it special, I was joined on stage by Russell Palmer, the man who taught me my first guitar chords all those years ago.” “I pursued my dream in music and by the goodness of God have been able to have a wonderful career, which has spanned
fifty years”.

“I have been blessed with Gold, Platinum and Multiplatinum albums, I have appeared many times on network television, even in moving pictures. I have won multiple awards from The Country Music Association, The Academy of Country Music, The Gospel Music Association and even a Grammy. I have even played on the Grand Ole Opry many times. But I was always on the outside looking in. I was always a guest, never a member.”