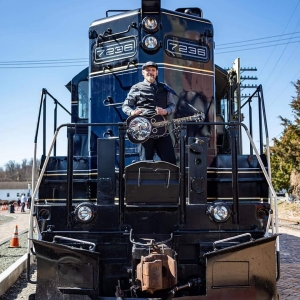 Chad Darou is a singer, songwriter, multi-instrumentalist, and producer originally from Seminole, FL now making his home in Susquehanna, PA. He began playing music at age 8. He is an elite Dobro™ (resonator guitar) player, but he plays all the bluegrass instruments. In 1982, at age 12 Chad performed at the 1982 World’s Fair in Knoxville, Tennessee, and on the Grand Ole Opry stage with Charlie Collins and Brother Oswald. In 1987, at age 17 Chad began performing with Bill Keith and Frank Wakefield as a member of the band Summit. Since then he has worked as a sideman with Del Reeves, Bill Harrell, The Gibson Brothers, Wheeler Creek, Bill Anderson, Boxcar Willie and James King. In 2016, Chad went on tour with the Dave Adkins band where he created a recognizable name for himself among his peers. In 2018, he released first solo project Raising the Bar (Bell Buckle), featuring guest artists Dave Adkins, Rick Faris, Greg Cahill, Valerie Smith, Cia Cherryholmes, Alecia Nugent, Jim VanCleve and others. His debut album released in the Bluegrass Today top 20 and the one single released from that album made to #1. In 2021, Chad was signed with Turnberry Records. His new album Susquehanna Line which features some of the genres best lead vocalists as well as Chad's ability to play all of the instruments at a professional level, will be releasing soon.
24
What's This
Advertisement