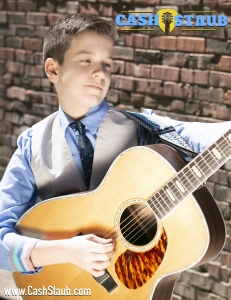 At just thirteen years old , It is hard to put into words the talent of Cash Staub. An old soul in a very young man's body, from Williamstown,KY, his music wins the hearts of all those that hear and see him.

Born Christopher Alan Staub Jr, his parents gave him the nickname "Cash" at two years old because he would dance and sing Johnny Cash songs.The name stuck and everyone knows him as Cash.

Fast forward eight years to his tenth birthday, his parents buy him his first guitar and lessons from Elmer Burchett Jr. With Cash's love for Bluegrass and old timey music, the teaching and guidance from Elmer , it wasn't long Cash was performing on stage, attending local jams and open mic events around the northern KY/Cincinnati OH area.

In early March 2018 , Cash was presented with a great oppurtunity to work with artist/producer Steve Thomas to make his first album. Just weeks before his twelfth birthday he was off to Nashville to record his first record.

The album Cash On The Barrelhead was recorded.With Cash's love for bluegrass and old time country music , it was only appropriate that the title song would be a Louvin Brothers cover. Featuring covers of Cash's favorite songs and artists. Featuring banjo playing by Elmer Burchett and fiddle , mandolin performances by Steve Thomas it makes for a very impressive album. Influenced by the likes of the Osborne Brothers, Bill Monroe, and Doc Watson, Cash Staub is a refreshing throwback to the earliest era of country/bluegrass music.

Cash Staub with his talents as a musician on guitar and his ability to bring a song to life with his vocals is well on his way to great things in his musical career.
5
What's This
Advertisement