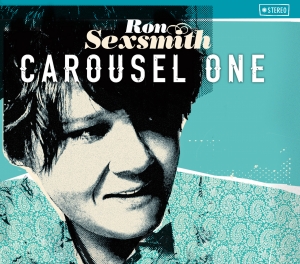 Compass Records is pleased to announce the new release from Ron Sexsmith, Carousel One. His first album in two years finds Sexsmith in surprising territory for a man often pegged as a downbeat balladeer: he’s actually contented.

The 16-track album is a warm, deeply involving set of songs that showcases Sexsmith’s great empathy and occasional sentimentality, but also his often-overlooked playfulness.

Songs like “No One” came from the idea of attempting to write in the vein of Roger Miller. Opening track “Sure As The Sky” originated as a folky campfire song but it turned into more of a folk/rock number. Carousel One (named for the luggage retrieval belt at Los Angeles airport where bags off Toronto flights are delivered) is probably the most diverse album of Sexsmith’s nearly 20-year solo career.

The ease this group felt in the studio is evident on the album, particularly on the rockier tracks such as “Can’t Get My Act Together” and “Getaway Car,” a laid-back track that emulates the swinging rhythms of ‘50s music.

Although the sound and feel of Carousel One are inspired by ‘50s pop and ‘70s albums from the likes of Phoebe Snow and Gerry Rafferty, it’s a record that sounds very fresh and modern. Ron has been a critical success since his self-titled debut back in 1995, an album that won the admiration of songwriters such as Elvis Costello and Paul McCartney. Carousel One glides into 2015 with the poignancy and craft that has come to be expected of Ron since ever then.