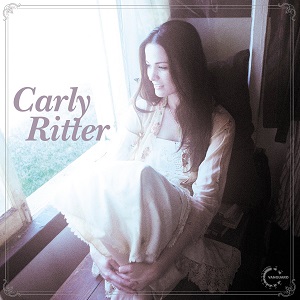 The rich, burnished, folk-rooted sound of Carly Ritter’s self-titled debut album makes it seem that this music was unearthed from a time capsule buried during the late ’60s, with its distinct echoes of Jackie DeShannon, Buffy Sainte-Marie, the Stone Poneys and, on one especially whimsical track, the Nancy Sinatra/Lee Hazelwood partnership.

With refreshing modesty and characteristic genuineness, Carly credits the extended family she made the record with for the sense of authenticity that permeates every note: the husband and wife producer team of Joachim Cooder (drums, piano) and Juliette Commagere (keys, electric guitar, backing vocals), Juliette’s brother, Robert Francis (bass, electric guitar, vocals) and Joachim’s father, living legend Ry Cooder (guitars), who filled out the marvelously skilled studio band. Martin Pradler, who works extensively with the Cooders, Commagere and Francis, engineered, mixed and played various instruments on the album.

“Joachim and Juliette have such a feel for mid-’60s and ’70s music, and they got this amazing sound,” says Carly. “And, of course, Ry Cooder and Robert Francis. They all know that music so well and how to bring that feel to my songs. It was so humbling to be in a room with all of them, seeing how they work and communicate. They speak this special language. It was so much fun to be part of that.”

Carly grew up surrounded by music. Her parents’ record collection skewed toward rock & roll, and she remembers her mom singing the kids Leonard Cohen songs as lullabies as they were going to bed. But there was one genre she wasn’t exposed to as a kid—not surprisingly, her dad, the beloved actor/comedian John Ritter, had gotten his fill of country music during his own childhood; his father (and Carly’s grandfather) was seminal country singer Tex Ritter. It was during her junior year abroad at the University of St. Andrews in Scotland that Carly became obsessed with traditional idioms.

“That was a special time for me,” she says. “I was getting exposed to these old ballads, and the imagery was strong, heartbreaking, haunting and beautiful. At that point in my life it really struck a chord, and so, when I came back, I spent my last year of college in the basement of the music library scouring sheet music for all these old folk songs, spirituals, blues and country songs. As I started exploring all this music, that’s when the seed was first planted for my own songwriting, and it’s when I started to learn guitar. I had played classical piano and harp since I was little, but the guitar inspired me in a new way. About a year and a half ago, I decided that this was what I really wanted to do, so I kept writing and trying to learn as much as I could about this art form. And I couldn’t have come across kinder and more supportive people than Joachim and Juliette and their families. All of them love making music, and so they were willing to help someone just starting out.”

But it wasn’t merely a matter of generosity on the parts of her newfound musical partners. They were blown away by this neophyte’s innate feel and expressiveness, not to mention her angelic voice. It happened in the space of an afternoon.

“I sent them three songs, and they asked me to bring over any other songs and ideas I had,” Carly recalls. “So I went over to their house, and they said, ‘Let’s just do this. We’ll record a four-song demo and see what happens.’ At that point, I hadn’t even considered that something like that was possible. I couldn’t believe that these two people I admired so much were willing to make that happen for me.”

So they demo’d the four songs, and that was all Vanguard needed to step forward, sign the young artist and underwrite the album sessions. They tracked the album in a week at a vintage Hollywood studio, then repaired to Pradler’s home studio for vocals and overdubs. Throughout, Ritter’s songs and engaging personality drew inspired performances out of her collaborators. “All of the songs are very special to me, and knowing how they approached each one and brought out the best in it makes me love them even more.

“‘Princess of the Prairie’ was an early one that I was really shy about sharing because I thought it was maybe too sentimental,” Carly admits. “I had written it for a certain girl in my life, because I’ve been very fortunate—I have a very loving, supportive family, and I’ve never had to worry about my next meal or a roof over my head. But still, I’ve struggled with self-confidence and self-worth. So this song is for this child—what I would say to her: This is your world. The sun is shining for you and birds are singing for you and no one can take that away from you. I’m proud of that message.

“I adore ‘It Don’t Come Easy,’ which Juliette wrote and asked me to add a verse. It’s a kind of sad song that speaks to some of the challenges of love. I played it recently at an open mic, and afterwards a man came up to me crying; he told me he had some kind of catharsis when he heard it. That’s one of the great things about sad songs.”

Carly cites the philosopher Soren Kierkegaard for the premise of “It Is Love.” “I ended up majoring in religion, not thinking about a career, obviously,” she says, “and the first course I took was called Love: The Concept and Practice. It was like someone knew I was coming and designed a course especially for me—it’s all I think about. In that class, we read Kierkegaard, and I basically paraphrased him for the lyric of ‘It Is Love.’ So I feel some satisfaction in the sense that I’ve finally used my obscure degree for a purpose.”

Another linchpin song, the poignant “Save Your Love,” occasioned a powerfully bittersweet duet with Robert Francis. “That one was written by Jerry Lynn Williams, a singer/songwriter from Texas who never got the recognition he deserved, although Bonnie Raitt and Eric Clapton covered his songs,” Carly explains. “Bill Bentley, who signed me to Vanguard, gave me the song. He said he’d been holding onto it for 30 years waiting to give it to someone. That meant so much to me. And then, to get to sing it with Robert was another unbelievable moment for me.”

Clearly, Carly still can’t believe her good fortune. “I don’t know when or where I sold my soul, but it’s one of the best decisions I’ve ever made,” she says with a laugh before turning serious. “There are challenges ahead, but it seemed like everything just fell into place with this group of people. I got really lucky.”

There is much more than luck involved. Carly Ritter is a captivating introduction to a fully formed artist with an old soul and a heart as big as the Hollywood sign.