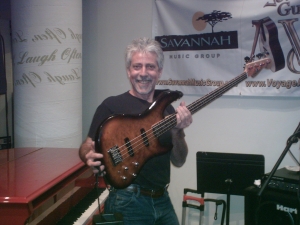 C F Smith moved to Nashville, TN, from Clearwater, Florida, in May of 2008.
"I didn't find what I was looking for in Florida," he says. "Nashville has what I was seeking; a city with strong, positive creative energy."
He had moved to Orlando in the mid-1980's, after spending a few years paying his dues with bands in the Midwest.
"At that time, Orlando had a thriving musical scene. Many of the clubs had an emphasis on bands that played a mix of cover tunes and original music. The local college radio station (WUCF, at The University of Central Florida, Orlando) featured local bands and musicians."
C F Smith has performed with several acts that shared the stage with The Atlanta Rhythm Section, Shortbus (formerly known as Sublime) and the Pat Travers Band.
He spent several years away from music, during which time he, "Felt a major part of my life was missing. Being reconnected with music is the best decision I ever made!"
1
What's This
Advertisement