Let's All Do Some Living - Cane Mill Road Live Album 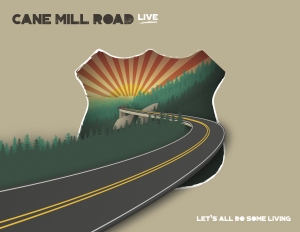 Let's All Do Some Living is the third Billboard-charting album release for Cane Mill Road. The album was recorded live before a sold out audience of 120 in Saloon Studios.

Rapidly rising in the bluegrass scene, the Billboard-charting artists are the youngest to garner an IBMA Momentum Band-of-the-Year nomination (2018) and are nominated again in 2019 for IBMA’s Momentum Band-of-the-Year Award. In addition, mandolin/fiddle player Liam Purcell and banjo player Tray Wellington are nominated for Momentum Instrumentalist-of-the-Year. Cane Mill Road landed a prestigious IBMA Ramble Band slot in 2017. Grey Fox selected them as an Emerging Artist in 2018 and Cane Mill Road will opened the main stage at Grey Fox on Friday and Saturday in 2019.

Signed by the Patuxent Music label, the band’s first two albums spent seven weeks on Billboard’s bluegrass albums chart, including two top 10 debuts. With the latest album on Billboard the band has hit the bluegrass charts for 10 weeks.

You’ve seen them at not only MerleFest, but Wide Open Bluegrass, Grey Fox, Delaware Valley, Bluegrass Island, Carolina in the Fall, Silver Dollar City, and hundreds of other venues/festivals over the past five years including internationally on a 9-day tour of Argentina.

Growing up just down the road from Doc Watson, Cane Mill Road rocks the traditional bluegrass standards they were raised on, yet boldly write original music with roots in the fertile grounds of bluegrass, with a little hint of old-time, blues, jazz, and Americana music that influences the band members.

The title signifies more than just the long hours on the road touring, but the spaces between the bluegrass foundation of the band’s youth and the new spaces of music they create together.

Honoring the past, the band looks to the future with a blended set of traditional and contemporary music.