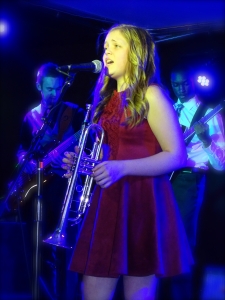 
So Campfire Soul was formed five years ago (2012) and the two seasoned veterans of the band are now twenty-six year's old - collectively. Yep, do the math. The band consists of: fourteen year old Sarah-Grace Kimberly on lead & background vocals, keyboards and trumpet; her twelve year old sister Reagan Kimberly on drums; fifteen year old Daniel Holder on bass; and the senior member of the lot, Brian Kimberly (aka dad) on rhythm guitar. For this recording they're joined by: twenty year old Zack Pearson on lead guitar & backup vocals; and fifteen year old Mogi Taylor on saxophone. "The Blues Found Me" is their debut release. It's a seven song EP with four of those being originals.

The Opening track is Campfire Soul's rendition of The Blind Boys of Alabama's arrangement of "Amazing Grace". It combines the lyrics of the traditional song being sung to the music of "House Of the Rising Sun". Now I'm not about to go comparing the two groups or their performances of the song but with that said, Campfire Soul did nail their version. Although the band was doing one heck of a job, for most of the song it was Sarah-Grace's powerful and wide-ranging vocals that were blowing me away. Then midway through the track she uses the B3 organ to elevate the rhythm section to a powerful climax that had me shaking my head in awe. If it were you telling me I just listened to a 14 year old rock this track, instead of me telling you, I'd call you a liar. Wow!

From a conversation I had with Brian, the original and title track, "The Blues Found Me", is actually the truth. In the early stages of the band's short career they were not blues artists and for that matter, they never even knew they liked it. Then, as it happened to many of us, the genre found them and the rest is history. It's a short up-tempo number which once again features the bands' strengths - smokin' rhythm from Sarah-Grace, Reagan and Daniel on the organ, drums, and bass and more magical vocals by Sarah-Grace.

This next original song's title describes how and where I met the band. It was while we were all "Hanging Round In Memphis" during the 2017 International Blues Challenge. Our mutual friend James "The Blues Hound" Nagel - who besides being in town to enjoy the competition, was also there to receive a very well deserved KBA Award - introduced me to the Campfire Soul who were performing as the Houston Blues Society's Youth Showcase representatives - a performance I sadly missed.

Wanting to pay tribute to one of her biggest inspirations, Bessie Smith, Sarah-Grace not only does so by covering her classic "Nobody Knows You (When You're Down And Out)" but she does so by doing it in a way that I'm sure would have put a smile on Bessie's face. In addition to once again defying her age with the emotion her vocals exude, she puts on one heck of a piano performance as well.

The EP closes with one of my favorite songs of all time, "I'd Rather Go Blind". It's a song I've heard by so many different artists and as of yet, I don't recall a version I didn't like. Sarah- Grace Kimberly, just kept that streak intact. Everyone knows that this is a song about the heartbreaking pain that comes from a failed relationship. Something all fourteen year old girls know about, right? Of course not, but don't tell Sarah-Grace that. She may have never lived the song but her heartfelt, soulful and emotional vocals will have you believing she had. On top of that, using her trumpet as the lead instrument, she adds a whole new dimension to the song. Throw in some stinging guitar leads and intense rhythm and this one's a total monster.

Other tracks on the disc include two other original songs, the N'awlins style "Bayou Man" and a rocker called "Little Bird".

This is the part of the review where I usually say should you like to find out more about the band just go to their website, but this time I'm changing that to say you should find out more about this band and you can do that by going to www.campfiresoul.com. As usual, please tell them the Blewzzman not only sent you but he's raving about you as well.

The Blues Found Me
In January of 2017, Campfire Soul entered the studio with the goal to record a sample of their songs that they had crafted live. Joined by the equally dynamic Zach Person, 20, on background vocals and lead guitar, as well as the innovative saxophonist, Mogi Taylor, 15, the energy in the studio was electric. What began as a few song demo, became a 7 song EP that showcases modern original Blues tunes, all while paying respect to timeless Blues classics. The EP begins with Zach and Sarah-Grace’s silky harmonies on “Amazing Grace” with a twist, and then is followed by the title track “The Blues Found Me” which features a classic Blues shuffle. Next up is the horn dripped Bayou Man, the fun “Hanging Round in Memphis” and the modern Blues/Rock “Little Bird”. Finishing off the EP is the timeless classic “Nobody Knows You When you’re Down and Out” and the crowd favorite “Rather Go Blind”. Campfire Soul’s debut EP clearly shows that the Blues did indeed find them, and the future of the Blues is better for it.