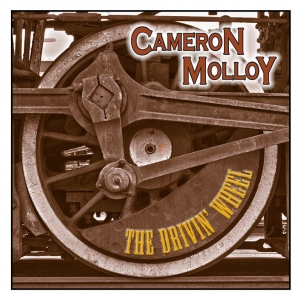 In November 1989 I was co-hosting an open mic night at a cafe near the city limits of Harrisburg,PA with a Deadhead hippie chick who worked the local Renaissance Faire. She drew in all manner of characters to these Sunday evening events, on any given night, a shy budding guitarist might follow a woman who has played Celtic music in all fifty states , or a wild eyed man playing Grateful Dead on a squeezebox. It wasn't easy to stand out in that crowd, but one man certainly did.

Canada native Cameron Molloy stepped up to the microphone and a lifetime of music and the stories behind the songs came pouring into that small room. "What is he doing here?" was the obvious question as Molloy artfully set up each song with a clever yarn and delivered his tunes with the ease and confidence that only come from decades on the road.

Molloy's vocal delivery strikes chords of sincerity; the stuff that comes from a life lived hard but intelligently.It's a long road from the big stage at the Calgary Stampede,( worlds largest rodeo) to a neighborhood pub in Harrisburg. I could scarcely fathom this distance or the detours, the mountains and valleys and wide open highways. Or the dues paid along the way. I was simply glad Molloy's journey had intersected with mine and I was not alone in this feeling.

Our local music scene would never be the same.Never had a soul come along with so much to share, with enough miles logged to become jaded, but instead possessing a contagious, youthful enthusiasm. Only a musician who plays for the art and the sake of the song, will give all he's got in any situation, be it to a handful of enthusiasts or a full blown concert production.This is Cameron Molloy.

Molloy's career spans back to the days when artists would personally deliver their 45 rpm discs to individual DJ's at independent radio stations ,( which at that time was all of them!).His hastily recorded single, "ICBC Blues" lamented a controversial decision by the government of British Columbia. The resulting spate of air play was a classic" flash in the pan" but now people knew his name. Meanwhile many of these small town DJ's he had made friends with had moved up into major market radio stations. They helped his releases such as "Ghost Riders in the Sky" receive considerable airplay and before long his record "Diamonds in the Dark" soared up the Canadian country charts to number 2. We local musicians had little idea of Molloy's illustrious career in his Canadian homeland. We might have guessed by the way he attracted many of the finest players around , or the way he masterfully ran his stage show as a "benevolent dictatorship". We only knew that we were having the time of our lives and sounding much better than our minimal rehearsals could explain.

On stage or off, Cameron Molloy brings out the best in those around him. That's just what he has done on the recording you hold in your hands. This is not a product stamped out by anonymous "studio cats", but more of a spirited conversation among friends, down to earth folks folks who have shared the pleasure of knowing and working with Cameron Molloy for over a quarter century. Won't you pull up a chair and listen in on our conversation?