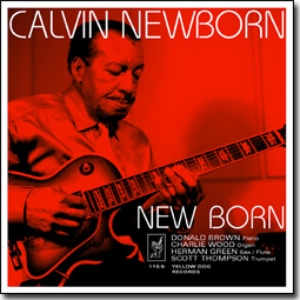 
Calvin Newborn - New Born
Meet guitar legend Calvin Newborn: He played on B.B. King's first recordings, taught Elvis how to dance, and tore up the Big Apple in the heyday of bop. Now Calvin - brother of jazz virtuoso Phineas Newborn - is hot on the comeback trail with New Born, a brand-new album chronicling his distinctive mix of Memphis blues and jazz.

Born and raised in Memphis, in the heart of the city's gutbucket blues scene, Calvin paid his dues on Beale Street when R&B was king. His impeccable jazz pedigree was honed at New York City recording sessions (and in smoky after-hours joints) alongside players like Jimmy Forrest, Hank Crawford, Charles Mingus, and Earl Hines.


Calvin Newborn - UpCity
Imagine a young Calvin Newborn, migrating from Beale Street to the Big Apple in the mid-1950s: Guitar in hand, he pounded the big city pavement from Birdland to Broadway, earning the nickname “UpCity” from none other than Miles Davis, who was more than impressed with the Memphis musician.

Over the last five decades, Calvin – the brother of jazz virtuoso Phineas Newborn – has bounced from Memphis to New York and back again, anchoring sessions for Hank Crawford, Earl Hines, B.B. King, Jimmy Forrest, Wild Bill Davis, Herman Green, and everyone in between.

UpCity reflects the diversity of Calvin’s jazz style: The album was cut at dual sessions in Memphis and New York (with trumpeter Bill Mobley, saxman Bill Easley, drummer Tony Reedus, and pianist Charles Thomas) during the late 1990s, then originally self-released on Calvin’s own label, Omnifarious Music. Today, Yellow Dog Records is proud to issue this jazz classic, praised by the late James Williams, Cadence Magazine, and more, nationally for the first time.


Other Albums for Yellow Dog Records on Airplay Direct:
http://www.airplaydirect.com/yellowdogrecords