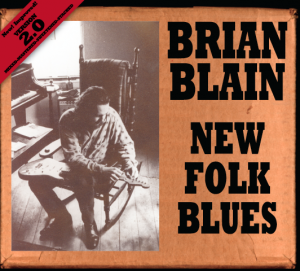 "Brian Blain is a fine singer-songwriter and an accomplished performer who lives at the corner of Blues Street and Folk Avenue." (Mike Regenstreif, Folk Roots Folk Branches)

Bluesman-songster Brian Blain delivers smart lyrics, unaffected vocals, an engaging personality and a laid-back groove. He is a blues minstrel, a modern-day griot, chronicling real life in song and stories from his unique point of view.

"Brian Blain, born in rural Quebec and active in the music scene for forty years, possesses a “northern” style that gives him a cool edge that just can’t be found in any other artist. His easy blend of folk and blues is a running commentary on life as he sees it. He combines his sardonic wit with his soulful guitar skills and crafts it into a unique musical perspective…Want to know how folk blues is played in Toronto? “Colorblind” Brian Blain, will show you how it’s done. Overqualified for the blues? Maybe so, but this man’s music is real. It is unpretentious and understated, yet intelligent and gently intricate, reflecting the very fabric of life and the very essence of the blues, folk, country and yes, even jazz."
– Veronica Timpanelli – jazzreview.com

Since arriving in Toronto in 1990, Brian Blain has been a quiet, enduring presence in Canadian roots music. He has worked in just about every aspect of the music business on stage and behind the scenes as a recording artist, sideman, producer, manager, music writer/editor, publisher, director and tireless promoter of Canadian blues artists.

Brian has been performing his unique brand of slow-cooked, solid-groove folk blues for 50 years - soulful, thoughtful, always entertaining. His guitar style is as authentic as you will find in any blues - south, east, west or north - but his lyrics reveal a unique, contemporary point of view. Ever since his 1973 recording, "The Story of the Magic Pick" (Good Noise/Polydor), Brian has been providing his wry commentary on the music scene. His song "Blues is Hurting" is included on the Toronto Blues Society’s compilation CD and his new CD includes a song about his previous record label.

"Now here’s something you don’t hear every day: a bluesman singin’ the blues about how lousy the blues singin’ business is these days" - Jeffrey Morgan, DETROIT METRO TIMES

Brian plays regularly in Toronto and this summer he played the Toronto Jazz Festival, The Orangeville Blues and Jazz Festival, The Canal Bank Shuffle and just returned from playing 12 house concerts in Manitoba and Saskatchewan. He performs solo, duo, with his acoustic “bluesgrass” outfit and with a full band, Brian and the Blainettes.

"He takes all his love for the blues and its offspring musics and filters it through a brain not exactly embittered by a downtrodden existence…Kind of John Hartford meets Steve Goodman meets the Red Clay Ramblers meets J.J. Cale" - Steve Bachleda, THE BLUES AMBASSADOR, MICHIGAN

"Blain is an astute observer of life and this is reflected in his lyrics which are shot through with a wry sense of humour." - Gordon Baxter, BLUES ON STAGE

Brian's early exposure to the blues consisted of one weekly radio show on French CBC radio, a reel-to-reel tape of Rev. Gary Davis and a mail-order instructional LP called "The Art of the Folk Blues Guitar" He learned every tune in the book and he still plays some of those songs today…on the same guitar!

"Brian Blain is an articulate, humorous singer-songwriter with a bluesy bent. His vocals are natural in the extreme, with no attempts to sound black or street (mostly the approach works)" - BLUES REVUE

Following a stint in Ontario as a junior copywriter at an ad agency, he returned to Quebec, playing with and producing records for two pioneering groups that blossomed in the late 60s from the hills of Quebec's Eastern Townships. Fraser & DeBolt re-defined "folk music" and Oliver Klaus, was probably the first "indie" band in Quebec to have their own studio and press their own records.

"Call Blain's music the blues of an educated sensibility that is just too connected to real life to be smug or brittle, an articulated expressiveness without pretension that possesses a literacy far too much lacking in our American music" - INDIANA BLUES MONTHLY

As a solo artist, Brian recorded a single in 1973 on Good Noise/Polydor, and performed with a back-up vocal group called The Blainettes, opening concerts for Lou Reed and Seals & Crofts and stopping the show at the legendary James Bay Benefit Concert that featured Loudon Wainright and Joni Mitchell. The recording featured members of the Mothers of Invention and the Manhattan Transfer, Tom "Bones" Malone and legendary drummer Jim Gordon (Derek and the Dominoes).

Brian's biggest boosters have always been the musicians he's come to know both on stage and behind the scenes. It was Toronto bassist Victor Bateman who convinced him to demo some of his original tunes after they jammed together at Brian's 50th birthday party. This led to the 1999 release of his indie CD "Who Paid You To Give Me The Blues?" He began performing locally as a solo artist, occasionally teaming up with Scott "Professor Piano" Cushnie, Suzie Vinnick, Paul Reddick, Carlos del Junco, and other great local artists. He’s even had the opportunity to play with blues luminaries like Hubert Sumlin, Gene Taylor of the Fabulous Thunderbirds and the late Long John Baldry.

One of Brian’s favourite things is introducing new and veteran blues artists to new audiences (and to each other) through his informal "Blues Campfire" song-swap sessions at festivals and music conferences. His Blues Campfires have featured The Harpoonist and the Axe Murderer, David Gogo, Matt Anderson, Ken Whiteley, Walter Parks and countless others. His year-long residency at Toronto's Tranzac Club featured a succession of Canada's greatest blues artists, Morgan Davis, Michael Pickett, Carlos del Junco, Madagascar Slim and many others. His after-hours blues jam at the 2005 Toronto Downtown Jazz festival had jazz luminaries Antonio Hart, Russell Malone and Roy Hargrove playing the 12-bar blues and loving it.

"Brian Blain is one of the most important and popular figures on the local blues scene...Expect a mix of gently satirical and more personal material." - Kerry Doole, TANDEM

Throughout these musical adventures, Brian has always been involved in printing and publishing (he started at The Sherbrooke Daily Record in 1963, back when they were still using hot type) and these days he is responsible for the publication of numerous music-industry directories, websites and newsletters including MapleBlues, Crescendo and torontojazz.com

And here are some words from fellow artists:

"Brian Blain has opened my shows on at least two tours, I had to shut him down after the last one because he was starting to make me work too hard to win the audience back......I just can't have someone stealing my crowd......no way! Seriously, the man has a groove, I'm into it." - HARRY MANX

"Original Canadian Blues by a superb guitarist and inventive songwriter. One of the best of the contemporary blues artists." - DOC MCLEAN

"I just heard his set and I can name every song he sang and tell you what it was about. How often does that happen?" - ALI MATTHEWS

“I got ears. I listen. You got something, Brian. Something good. I’m not going to forget you.” - HUBERT SUMLIN