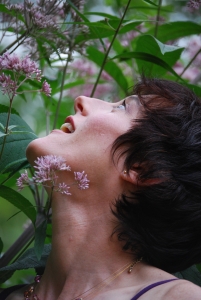 A dear friend calls her the female Gomer Pyle because she’s such a goober until she opens her mouth to sing. With a Patsy Cline ache and pitch perfect notes she easily wraps her voice around everything from old school country swing to classic jazz to contemporary folk. Brenda Jean’s sung for a thousand people in concert halls and for a few dozen on the streets of New Orleans. She tours in a 1982 Mercedes station wagon that runs on french fry grease. And she’s got a new album out, "Joe Pye Weed," co-produced with Davy Sturtevant and featuring a full house of top notch Austin musicians.

Growing up, Brenda Jean was lucky to hear Grand Ol’ Opry songs sung live by her mother as she worked around the house. She also immersed herself in her parent’s LP collection. Singers like gospel’s Mahalia Jackson, country’s Ernest Tubb and Irish tenor Denis Day made for an eclectic influence that you can hear in her music today. Later on, she discovered newgrass and folk artists like Laurie Lewis and Cheryl Wheeler; in fact, some of their songs appear on "Joe Pye Weed." (Her first release, 2008’s "next one by" is a sparser acoustic offering, recorded with guitarist/songwriter Davy Sturtevant.)

“I’m Better Off Without You,” written by Brenda Jean and Davy Sturtevant, is a cry-in-your-beer song with a twist. The lout who dumped her gets a tongue lashing and in it all, there’s a silver lining – “You tossed me off a cliff / That’s how I found out I could fly!”

“On the Side” is a flirty blues number asking a certain someone to be her squeeze: "If you need some company / Why can't I love you on the side?" The way she wails and moans on this one, how could the intended say no?

There’s also the classic-country style “All I Ever Got From You," the bluegrass swing of “I’m Gonna Be the Wind,” (Lewis), the peaceful ballad “The Peepers’ Song” (Sturtevant/Sturtevant), and the melancholy “Blue Skies Waltzing to Grey” (Sturtevant/Helsel), complete with Maines' wonderful crying pedal steel.
.
Songs appearing on her first release include the original, “Paw Paw Tree,” a mournful folk ballad; “But a woman’s not a creature you can plant like tree or vine / A woman is possessed of her own heart and soul and mind.” Also, “So Beautiful,” (Lewis/Minger) done in a jazz style, with an Ella-like smoothness.

Throw that all in with a Peggy Lee song done in the style of Les Paul and Mary Ford ("It's A Good Day") and you’ve got a versatile vocalist who can belt, croon and sing the tarnish off the silver. You’d never know that she rarely sang in public before joining community choirs at the age of 40. She always knew she could (and would) do it, she just never got around to it until now. Good thing, ‘cause she’s all THAT with a side of fries. And save the grease, will ya? That Mercedes needs to get to the next gig...
8
What's This
Advertisement