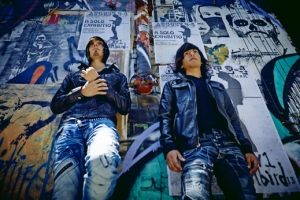 "We just shot our first music video last week, for our upcoming second single. The second Single will be the main single promoting our upcoming EP due out in September. Besides that we are working on our first LP right now due out early next year that we will be touring through Europe with."

popVLTR: You've been making moves in Los Angeles, how'd you get into music? Breath of Grey: Dice: I was born into it; my family has always paid the bills with music. I grew up listening to a lot of different styles of music, mainly Electronic music and hip hop; I got more interested in Rock music later in my life. I really wasn’t interested in a career in music until I was around 14, and picked up a guitar around 16. Xero: I got interested in pursuing a music career in Middle school, I must have been in the 8th grade I believe. I listened to many different styles of music; I was always interested in combining different genres and sounds to make a new hybrid.

popVLTR: Congrats on 'Instinct', who are some of your influences? BOG: Dice: I've been influenced by lots of artists and genres over the years. Some of my first influences were Daft Punk, The Prodigy, early Linkin Park, that kind of music. In my teen years I got into more rock music Like Led Zeppelin, Aerosmith, Jimi Hendrix, The Doors and so on. I then picked up an ear for more modern rock. Xero: I have many influences like Pendulum, Celldweller, Blue Stahli, Linkin Park, The Prodigy, the sound for Instinct was not a specific one picked out but a mixture of different various influences that I had as well as Dice.

popVLTR: What are some of your proudest moments in music so far? BOG: Dice: There have been a few that stand out to me with artist outside of Breath Of Grey like previous bands both Xero and I played in. I think everyone's first show is special to them in some way or another. When it comes to us as a band I think our proudest moments are yet to come, seeing we just got started and haven't really gotten the chance yet to show people what we got. Xero: Some of the proudest moment in music so far has been having someone that is as dedicated and easy to coop with in making our particular unique sound, as well looking back at the previous bands we have been in and how things picked up when learning to produce our music, without barriers.

popVLTR: What cool stuff is on the horizon for Breath of Grey? BOG: We just shot our first music video last week, for our upcoming second single. The second Single will be the main single promoting our upcoming EP due out in September. Besides that we are working on our first LP right now due out early next year that we will be touring through Europe with. We are also currently working on our stage show, it has a lot of thought put into it, and we can't wait to present it to all the awesome people out there. Final Words: Thank you very much for the interview and giving us this opportunity, also we have to thank all the great fans, and readers for taking the time to check us out!