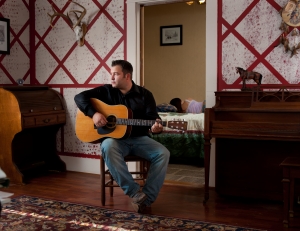 Review
Not long ago, I was discussing the future of country music with a good friend who’s been playing it for more than 40 years. My concern was the greats we’d been listening to for most of our lives were departing, and that the stuff coming out of Nashville these days for the most part is a long way from Hank Williams and Bill Monroe. My friend said, “No, they’re out there. You won’t hear them on the radio, but they’re out there.”

Brandon Lee Adams is proof my friend was right. If his debut indie album, Hardest Kind of Memories is any indication, Brandon is someone who is intent on carrying on the bluegrass tradition. Not only is he an astonishingly good flat picker, he’s a natural from the heart singer and his songs, all original (with the exception of a Bill Monroe instrumental, “Road To Columbus”) echo the greats from the Stanley Brothers to Hank Williams as well a host of guitarists from his hero Tony Rice (who joins him on a track, which says something about Brandon’s talents right there) to touches of Doc Watson and Norman Blake.

Adams is backed by an extremely capable crew of musicians, most notably Scott Vestal on banjo and Randy Kohrs on dobro, as well as a few mandolinists, and a couple of fiddlers who match his picking prowess at every turn.

BrandonAdams3Brandon was born in Charleston, West Virginia, and raised by his grandfather, but his weekends and summers were spent on the family farm in Kentucky, and his lyrics reflect that upbringing with songs of hard work, hard times, family and faith. The best part of his songs is he writes with such a natural voice that his songs sound like you’ve known them all your life.

The songs that hit me the hardest are “Already Home” and “Where I Can Lay My Burdens Down, (I’m Free)” where the bluegrass gospel harmonies are a total knockout. But there also is the high lonesome “Sweat Of Your Brow” and ballads of yearning and loss such as “I Long For Seventeen” featuring Tony Rice on guitar, “Where The Cold Wind Blows” “Docks of Sutters Bay,” (check out the bass run on the first guitar solo) and the title track.

In addition there are several dazzling instrumentals including the opening “Roberts Ride,” “Slapshot” and “Misery.”

If there’s any justice in this world, Brandon Lee Adams will hopefully soon find himself playing the bluegrass festivals across the country.