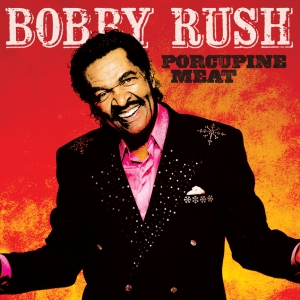 Naming your album after a song entitled “Porcupine Meat” may seem a little unusual unless you’re Bobby Rush, who earned his first gold record in 1971 with a hit entitled “Chicken Heads.” He elaborates on his recent composition: “If a lady won’t treat me right, but she doesn’t want anyone else to have me, that is hard to digest.” Hence the lyric, “too fat to eat, too lean to throw away.” Porcupine Meat is Rush’s debut release for Rounder Records, and one of the best recordings of his astonishing 60-plus year career. Rush estimates that he has cut over 300 songs since he first began making music. He has been honored with three Grammy nominations, as well as 41 nominations and 10 awards from the Blues Foundation.

But make no mistake: Rush is not your typical octogenarian. At age 82, he exudes the energy of a 20 year old, and is on the road for over 200 dates a year. His hectic tour schedule has earned him the affectionate title “King of the Chitlin’ Circuit.” Rush has traveled the globe, and has performed in such faraway places as Japan and Beirut. In 2007, he earned the distinction of being the first blues artist to play at the Great Wall of China. His renowned stage act features his famed shake dancers, who personify his funky blues and the ribald humor that he has cultivated during the course of his storied career.

Born Emmet Ellis, Jr. in Homer, Louisiana, he adopted the stage name Bobby Rush out of respect for his father, a pastor. According to Rush, his parents never talked about the blues being the devil’s music. “My daddy never told me to sing the blues, but he also didn’t tell me to not sing the blues. I took that as a green light.”

Rush built his first guitar when he was a youngster. “I didn’t know where to buy one, even if I had the money. I was a country boy,” he says. After seeing a picture of a guitar in a magazine, he decided to make one by attaching the top wire of a broom to a wall and fretting it with a bottle. He also got some harmonica lessons from his father He eventually acquired a real guitar, and started playing in juke joints as a teenager, when his family briefly relocated to Little Rock, Arkansas. The fake moustache Rush wore made club owners believe he was old enough to gain entry into their establishments. While he was living in Little Rock, Rush’s band, which featured Elmore James, had a residency at a nightspot called Jackrabbit.

During the mid-1950s, Rush relocated to Chicago to pursue his musical career and make a better life for himself. It was there that he started to work with Earl Hooker, Luther Allison, and Freddie King. sat in with many of his musical heroes, such as Howlin’ Wolf, Muddy Waters, Jimmy Reed, Willie Dixon,and Little Walter. Rush eventually began leading his own band in the 1960s. He also started to craft his own distinct style of funky blues, and recorded a succession of singles for a various small labels. It wasn’t until the early 1970’s that Rush finally scored a hit with “Chicken Heads.” More recordings followed, including an album for Kenny Gamble and Leon Huff’s Philadelphia International Label.

Rush relocated one final time to Jackson, Mississippi in the early 1980s. He was tired of the cold up north, and he realized that setting up his base of operations directly in the center of the South would make it easier to perform in nearby cities on weekends. More indie label recordings followed. Songs like “Sue, A Man Can Give (But He Sure Can’t Take It),” “What’s Good For The Goose Is Good For The Gander Too,” and” I Ain’t Studdin’ You” became regional jukebox favorites in juke joints throughout the region, and many of those songs are still fan favorites that are an integral part of his live repertoire.

Since 2003, Rush has self-released the majority of his work (including the critically acclaimed Folk Funk album) on his Deep Rush label, but recently, he came to the realization that having a bigger record company behind him would be beneficial. “I outgrew myself,” said Rush. “I need someone to help in doing the things I can’t do. When you are wearing all the hats, you can’t be everywhere at once.”

Enter esteemed producer and two-time Grammy winner Scott Billington, Rounder Records’ longtime VP of A&R. Billington first met Rush at a Recording Academy meeting 25 years ago, and they became fast friends. He has wanted to work with Rush ever since. “He is the most vital bluesman of his generation,” said Billington. He continues, “There are many people who still don’t know Bobby Rush, even though he is a hero in the parallel universe of the Chitlin’ Circuit—fans stop him on the street in Memphis and Helena and Little Rock.”

Porcupine Meat will not only please Rush’s older fans, but is likely to win over many new ones. Billington reflects, “We wanted to come up with something fresh, while staying 100% true to Bobby.”

The album was recorded in New Orleans, and Rush was pleased and proud to be given the opportunity to make an album in his home state for the very first time. His impassioned vocals and in-the-pocket harmonica playing are among the best performances of his career. Unlike most of his recent releases, these sessions only feature real instruments and no synthesizers. All of the rhythm tracks were cut live in the studio, often edited down from jams that on several occasions ran close to ten minutes.

For the project, Billington assembled some of the best Louisiana musicians, including Shane Theriot, David Torkanowsky, Jeffery “Jellybean” Alexander, Kirk Joseph, Cornell Williams, and others. Rush brought along his old friend and longtime collaborator, guitarist Vasti Jackson, who worked with Bobby and Scott on getting the songs ready for the studio. Guitar greats Dave Alvin, Keb’ Mo’, and Joe Bonamassa all make guest appearances on the album.

Rush has always been a prolific and clever songwriter. The songs he penned for Porcupine Meat such as “Dress Too Short,” “I Don’t Want Nobody Hanging Around,” “Me, Myself And I,” “Nighttime Gardener,” “It’s Your Move,” and the title selection, all equal or rival his best material. “Funk o’ de Funk” delivers exactly what the title suggests and what Rush has always done the best, which is putting the funk into the blues. While “Got Me Accused” is inspired by events from Rush’s own life, the lyrics tell an all-too-familiar tale about the rampant racial injustice that afflicts our society. Producer Billington and his wife Johnette Downing (the well known New Orleans songwriter and children’s musician) co-wrote a couple of fine selections, “Catfish Stew” and “Snake In The Grass.”

Bobby Rush is the greatest bluesman currently performing. Porcupine Meat is a testament to his brilliance, which presents him at his very best, and doesn’t try to be anything that he is not. “I just try to record good music and stories,” he humbly states. With this recording, he has more than accomplished his goal, and has produced one of the finest contemporary blues albums in recent times.
19
What's This
Advertisement